The Con­vention of States Project propose to amend the U.S. Con­sti­tution using Article V, through the meeting of the states rather than Con­gress. The orga­ni­zation hopes to pass amend­ments in order to limit the power and scope of the federal government.

Junior Lucy Meckler, the club’s co-pres­ident, said she feels the club pro­vides a con­crete approach to solving the issues of a bloated government.

“We believe in an ide­ology that the federal gov­ernment should be reduced in certain aspects, but not nec­es­sarily how or in what manner,” Meckler said. “That differs from groups like YAF and YAL because they all endorse a certain platform or a certain par­tic­ipant of that platform. It’s a struc­tural, con­sti­tu­tional way to fix the gov­ernment instead of just voting in new people or edu­cating citizens.”

“CSG really spends time edu­cating the grass­roots and building pos­itive cit­i­zenship,” McPherson said. “Their agenda is the people’s agenda, and it appeals to all people across party lines and across ide­o­logical lines.”

Sophomore Austin Mock and head of the Club Over­sight Com­mittee on Student Fed­er­ation also felt the club fit a unique role on campus.

“They had a mission that was not already being ful­filled on campus,” Mock said. “A non­par­tisan, grass­roots orga­ni­zation didn’t already have an estab­lished place on campus. It was refreshing and new.”

Meckler has been involved in pol­itics since she was 8 years old; her father, Mark Meckler, co-founded the tea party movement and is the current pres­ident of Cit­izens for Self-Gov­er­nance. Mark Meckler has great enthu­siasm for these stu­dents’ work.

“We are very proud of the student leaders who char­tered the first campus Cit­izens for Self-Gov­er­nance club in the nation at Hillsdale College,” Mark Meckler told The Col­legian. “This is an his­toric event for our orga­ni­zation, and it is fitting that this first should take place at Hillsdale, an insti­tution ded­i­cated to the same prin­ciples which guide CSG.”

That same enthu­siasm can be seen in Meckler’s devotion to her new club.

“The solution to the problem in D.C. comes from the grass­roots,” Meckler said. “It gives me an immense amount of faith trav­eling across country and seeing that these people are active in their local pol­itics and care about what’s hap­pening on their com­munity level, instead of just hopping from L.A. to D.C. to New York and only talking to people who are on the bureaucracy.”

The club’s other co-pres­ident, junior Weston Boardman, interned for the Con­vention of States national Team as the pres­ident of CSG’s per­sonal intern and as the Intern Coor­di­nator for the parent orga­ni­zation. Boardman said he feels the club brings an invaluable per­spective to Hillsdale students.

“Hillsdale is shel­tered,” Boardman said. “The college incul­cates us with the high, lofty prin­ciples and teachings, but this practice can often lead stu­dents to become out of touch with real world. CSG brings a dose of reality that is des­per­ately needed here.”

For stu­dents who join the club, weekly meetings will be just one of the oppor­tu­nities to get involved. The club has con­nec­tions to intern­ships for their parent orga­ni­zation as well as oppor­tu­nities for lob­bying for leg­is­lation which aligns with their agenda.

Meckler and Boardman share passion for the Con­vention of States Project, which trans­lates to their work in cre­ating the club.

“These two have the best lead­ership capa­bil­ities and know-how for the job,” McPherson said. “CSG is basi­cally Lucy’s life. She and her father are polit­i­cally well con­nected, and she is blessed with great com­mu­ni­cation skills, among a wealth of other skills, that makes her the best for this job. Weston has worked for Lucy’s dad for almost a year now, and his passion and fire for the cause are unmatched.” 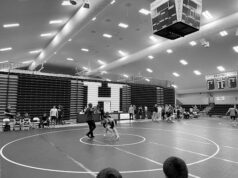