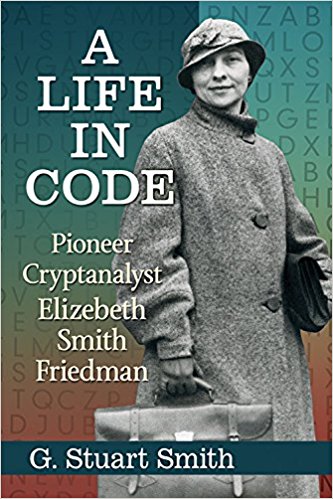 AmazonWhen Elizebeth Smith Friedman was solving hidden mes­sages from a sub­poenaed trunk in Houston, Texas, she didn’t expect to find evi­dence that would help save the United States face in the inter­na­tional com­munity — and more than $300,000 related to a case that hap­pened off the coast of Louisiana.

Friedman’s ground-breaking work would become the model for law enforcement and anti-ter­rorism strategy for analysis and infor­mation sharing in the 21st century. She created a code system for an agency that would even­tually evolve into the CIA and helped lead a Coast Guard unit that was the first U.S. team to break mes­sages from the German Enigma code machine (like from the movie “The Imi­tation Game”). Addi­tionally, she deci­phered the mes­sages of alcohol smug­glers during Pro­hi­bition and World War II spies.

And, of course, the liberal-arts student’s interest in the early science of crypt­analysis started with William Shakespeare.

Friedman grew up on a farm in Indiana in a Quaker family. She first caught an interest in code­breaking during college at Wooster College, when she learned of the theory that Francis Bacon had written Shakespeare’s works and hidden a cipher in them to declare so.

Friedman later trans­ferred to Hillsdale College, where she studied English, joined Pi Beta Phi, and served as lit­erary editor of The Col­legian. In 1938, the college would award Friedman with an hon­orary doctor of law degree for her work in the Treasury Department.

After college, she worked as a librarian in Chicago, Illinois, because it had a Shake­speare folio, but the owner of Riverbank Lab­o­ra­tories, an estate of a wealthy man inter­ested in inves­ti­gating diverse topics, recruited her to do research on ciphers in Shake­speare. Her super­visor wanted to prove that Bacon, who had invented the bilateral cipher, had hidden one inside the bard’s text, pro­claiming Shake­speare to be a pseudonym.

There, Elizebeth Smith met William Friedman, whom she would marry, and intro­duced him to crypt­analysis. William Friedman became involved in the Shake­speare research and would even­tually surpass his wife in fame when he led the team that broke the Japanese Purple code, which pre­dicted an attack on the United States prior to Pearl Harbor.

With the out­break of World War I, the Friedmans’ employer had the couple train code­breakers for the mil­itary, and they deci­phered mes­sages for various federal gov­ern­mental depart­ments from Riverbank, helping to convict con­spir­ators. William Friedman even­tually made his way into the Army, and Elizebeth Friedman into the Navy — and shortly there­after, the Coast Guard and Bureau of Foreign Control.

There during Pro­hi­bition, Elizebeth Friedman became the first crypt­an­alyst to use hidden mes­sages to catch smug­glers, cracking more than 12,000 rum-runners’ mes­sages. Friedman also tes­tified in many trials, gaining her national pub­licity, which she often decried. Her work led Con­gress to approve a seven-person crypt­an­a­lytic team for her to teach and lead.

During this time, Friedman deci­phered the mes­sages in the trunk that led to the rev­e­lation that a ship flying a Canadian flag and sunken by the U.S. Coast Guard for not com­plying with heed and be searched signals was actually owned by an American. The Cana­dians’ claims against the United States decreased fol­lowing the rev­e­lation, and the Canadian gov­ernment later secured Friedman’s help with opium-smug­gling codes.

Friedman’s work was far more secretive during World War II. At the start, her crypt­an­a­lytic team moved from the Treasury Department to the Navy with the Coast Guard, and she became second-in-command in her unit to a man with less expe­rience because she was a woman.

Nonetheless, her team was the first in the United States to crack the so-called unbreakable Enigma codes made from a German machine that changed its pattern every day.

Friedman also helped to take down Vel­valee Dick­inson, an infamous Japanese spy known as the Doll Woman. She dis­covered Dick­inson had used the names of clients from her New York doll store to send encoded material, which Friedman deci­phered, to Japanese agents.

At the end of the war, the Coast Guard let Friedman go, and she became a con­sultant to create a com­mu­ni­ca­tions security system for the Inter­na­tional Mon­etary Fund.

In retirement, Friedman and her husband, as masters of their craft, returned to the project on which they skep­ti­cally worked when they fell in love and wrote an award-winning essay and book that destroyed the argu­ments claiming Francis Bacon had written Shakespeare

G. Stuart Smith’s journey through the life of Friedman is short but packed with raw infor­mation from 50 pages of sources. Many quo­ta­tions from Friedman’s memoirs and inter­views show her wit and intellect con­trast with the fre­quent reminders of Friedman’s accom­plish­ments and, at times, chal­lenges in working in a man’s world. Although descrip­tions of the codes Friedman tackles could be con­fusing, the sto­ry­telling of the Friedmans’ love story, how she tackled the cases she faced, and her rise to national attention keeps the reader hooked.

While Friedman cracked the codes of smug­glers, spies, and Shake­speare, Smith’s “A Life in Code” cracks open the incredible story of this Hillsdale alumna.