Econ­omist William J. Luther said he doesn’t think the dollar will be chal­lenged by the Bitcoin or any other digital cur­rency any time soon.

In the Jan. 9 talk held by Praxis, Hillsdale College’s eco­nomics club, the assistant pro­fessor of eco­nomics from Kenyon College said he thinks Amer­icans will con­tinue to use dollars, even while financial insti­tu­tions adopt some of the tech­nologies used in Bitcoin transactions.

“I think we will adopt that tech­nology in one way or another, that is we’ll use that tech­nology to process dollar trans­ac­tions,” Luther said. “Most people just aren’t inter­ested in using some new money and so they won’t.”

The blockchain, which Luther described as a sort of public ledger, dis­tributes trans­ac­tions across the entire network of cur­rency users without the need for a third party. Tra­di­tional financial trans­ac­tions all require money transfers to go through a third party, making them more expensive.

But while Luther said he doesn’t believe Bitcoin or its com­petitors will dis­place the dollar, he said he believes it could be a viable option in coun­tries like Venezuela, where their cur­rency is hyperinflated.

Luther also said Bitcoin may get over­taken by another digital cur­rency in the future.

“I liken it to 1998,” Luther said. “You know search engines are going to take off but which search engine? How many people would have selected Google — I would have put my money on Ask Jeeves.”

Junior Summer Burk­holder, who said she didn’t know much about Bitcoin before attending the talk, thought the talk was very infor­mative and appre­ciated that Luther gave both the pros and cons of Bitcoin. Still, she doesn’t plan to pur­chase any cryptocurrency.

“I would like to keep my money,” Burk­holder said. “Maybe if I was a little richer.”

“A lot of people know it as some eso­teric cur­rency that lots of people like to use,” he said. “Actually learning how the cur­rency func­tions was inter­esting to me.”

Millius said he would buy Bitcoin, if he had more money, too.

Praxis Pres­ident junior Emma McCormick said the talk was the first of five talks Praxis is holding this semester. The next will be from Steven Horwitz on inequality and income mobility in America on Feb. 22. 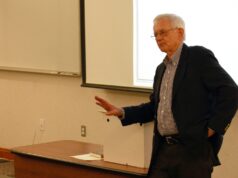 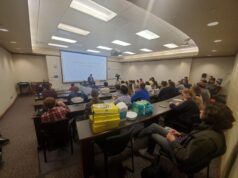