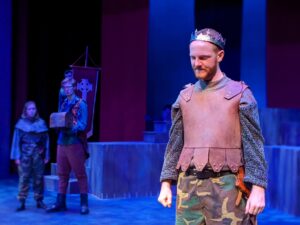 The Tower Players took char­acter devel­opment to a new level with nine dif­ferent men and women playing the role of King Henry in the abridged and adapted version of “Henry V.”

“I think that it’s important to go into it and expect some­thing dif­ferent,” sophomore stage manager Brooklyn Little said. “This isn’t like run-of-the-mill Shake­speare. Matsos has this concept, and it’s def­i­nitely come to life. Don’t have any pre­con­ceived expec­ta­tions in terms of what you remember about “Henry V,” because this is very different.”

The play follows the French and the English on the verge of war. What begins with a game of tennis balls devolves into the two nations going to war. The play ends with the union of the French and English via the mar­riage of Henry V and French princess Katherine.

“What we have now is a very con­densed version of the story,” junior Matthew Welch said. “I’m not sure that it’s a slow burn as much as it is riding the line between comedy and tragedy. My first sequence is a good bit of just off-the-top, I’m‑angry-at-you, and then I almost stab myself with a sword. Then, my second sequence is like ‘I’m leaving to go off to war, and I may never see my wife again.’ So it’s all throughout, and it’s gonna entirely depend on the scene.”

The switching of actors playing King Henry is sym­bolized by the trans­ferring of a crown between actors with spe­cific music and lighting to accompany the change.

“Once it gets to be too much, the crown is passed to a new actor,” Little said. “Basi­cally, it shows the fact that Henry goes through so much devel­opment that from the beginning of the show to the end of the show, he’s a com­pletely dif­ferent person. Literally.”

The cast list itself came out without parts being delin­eated. Everyone was simply a part of “The Company.” Roles were changed and added throughout the rehearsal process.

“I wanted everybody to think of them­selves as belonging to one unit, almost like a mil­itary unit that is respon­sible for the well being of the whole,” director Christopher Matsos said. “Every part knows the whole thing. I didn’t want them to go off thinking ‘okay, I get to just read this script now and only study my own lines.’ I wanted them to have a sense of the whole story.”

The cast is com­posed of stu­dents from a wide range of grades, from mul­tiple freshmen to a fifth year senior, and, according to sophomore Liliana Cardwell, everyone is equally included in the process.

“There are no gaps in the cast,” Cardwell said. “We’re family, we are a team, and we work together. We have lit­erally been in life threat­ening sit­u­a­tions together. We’ve had to work to not destroy one another like 15 hours a week. It could be chal­lenging, but we’ve got good people, so it hasn’t been.”

Most actors play more than one role, which neces­si­tated cre­ativity on the part of costume designer, Corinne Langford.

“Our costume designer is a genius,” Matsos said. “I mean, she’s so bril­liant. She came up with designs that can rep­resent mul­tiple char­acters, and all the cos­tumes look like they have the same DNA, which is the mark of a really good design.”

The first couple of weeks were blocking, before tran­si­tioning to 1 – 2 weeks of fight scenes, chore­o­graphed by Hillsdale alumna Caitlyn Grace ’12. Since then, rehearsals have been a com­bi­nation of the two.

“It’s like learning a new lan­guage, and at the same time, you’re trying not to kill the person adjacent to you,” Cardwell said. “Then the adren­aline on stage kicks in, and you pray that it looks good. There is set chore­og­raphy that you have to stick to while making it look like you’re just antic­i­pating every move as if you have no idea what’s going on.”

On the tech­nical side, the show fea­tures a simple set and limited props, aside from blunted medieval swords. Matsos says this is meant to encourage the audience to use their imag­i­nation in telling this story.

“Shake­speare was orig­i­nally a highly acces­sible expe­rience,” Matsos said. “A lot of people don’t know that and become pretty con­fused by the lan­guage. I’ve really reit­erated to the cast: Imagine that you’re telling this story to children. Will they be able to follow this story? Are your character’s inten­tions clear enough? Shake­speare can be acces­sible and can be about action, as well as about rhetoric.”