Behind the two-and-a-half-year project of building Christ Chapel lay a countless number of cre­ative deci­sions, from where to place it on campus to what it should look like inside and out, said architect Duncan Stroik, who gave a talk on the project on Nov. 25 in Plaster Auditorium.

The first question, before thinking about design, was the location of the chapel. Two pos­si­bil­ities included beside Howard Music Hall and in what is now the large parking lot next to Simpson Residence.

“We made the radical pro­posal to put the chapel at the center of campus on the main axis behind Central Hall in the hopes that this project would lead to the cre­ation of a new quad­rangle,” said Stroik, a nationally-renowned architect whose firm is in South Bend, Ind.

Stroik said his archi­tec­tural inspi­ration came from Christ Church in Philadelphia and St. Martin in the Fields in London. Stroik drew from Christ Church’s clas­sical archi­tecture with its bal­conies and big windows. St. Martin in the Fields, designed by architect James Gibbs, com­bined the portico from antiquity and early Christian churches, with the medieval spire.

The archi­tecture aimed to be clas­sical as well as symbolic.

He called Hillsdale’s Christ Chapel “much more simple than England but as sub­stantial as Philadelphia. Christ Church was where the founding fathers met when they had the Con­ti­nental Con­gress. We’re con­necting two buildings and two events.”

The size of the chapel was an issue.

“The College wanted a chapel that would seat 1400 but should feel com­fortable for 600.”

Stroik ful­filled this request by making it pos­sible to fit 600 people in the nave — the central part of the building, between the pillars — and more elsewhere.

“The big columns sep­arate the nave from the aisles and bal­conies, and the back balcony. You don’t have to use the bal­conies or the side aisles. But when you need them, we can pack people in.”

“The college wanted a full sym­phony to be able to fit in the chancel, and 100 voices. The chancel is probably bigger than most cathedral chancels in America,” Stroik said.

Unlike St. Martin of the Fields, Christ Chapel does not have a tower, because Stroik and others didn’t want it to compete with Central Hall.

“Sym­metry is great, but you also want dia­logue, you want dif­ference, you want inter­con­nect­edness,” said Stroik.

Stroik expressed his eagerness to work with the college again, pos­sibly on a new library.

“The thought­fulness behind his design makes me hope that the admin­is­tration puts him in charge of redoing the hotel and library, in addition to whatever else the college is planning on doing con­struction-wise,” Luc­chetti said.

David Whalen, former provost of the college and English pro­fessor as well as asso­ciate vice pres­ident for cur­riculum, attended the talk and said in an email that he found it interesting.

“The lecture made clear, without boasting, how exacting and rig­orous the project was in its thinking and exe­cution,” Whalen said. “Mine cer­tainly was a minor role, with Dr. Arnn and Rich Péwé being much more involved. I con­sulted where I thought I could be helpful, both as regards design and the potential use of the Chapel. It was probably more fun than is strictly proper for so noble and grand a project.” 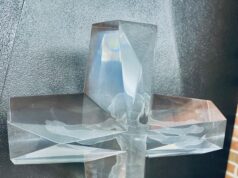 From the Vietnam Memorial to the old union chapel: how artist Frederick Hart came to Hillsdale