Attorney Andrew Fink ’06 will run as a Repub­lican to rep­resent Michigan’s 58th Dis­trict in the State House of Rep­re­sen­ta­tives. He made the announcement at a Hillsdale County Repub­lican Com­mittee meeting on Thursday, Nov. 7.

As an attorney, Fink said he’s had broad exposure to the law and realized that many areas of the law could use reform.

“It’s never left my mind that I’d like to serve in the gov­ernment, par­tic­u­larly in the leg­is­lature,” Fink said. “It’s some­thing that I care a lot about. As I thought about what I wanted to do next, this is the thing that made the most sense to me.”

After grad­u­ating from the Uni­versity of Michigan Law School in 2010, Fink was on active duty in the Marines for three years before moving back to Michigan and prac­ticing law with his family.

“I’ve always thought of myself as somebody who was ori­ented more around service than working for profit,” Fink said. “Working so that other people could make their own choices in their own lives is what I always thought was more important.”

Since January 2019, Fink served as State Sen. Mike Shirkey’s dis­trict director in Hillsdale County but resigned about a month ago to prepare running for office.

“What I expe­ri­enced as dis­trict director was seeing all walks of life and knowing what people here care about,” Fink said.

Fink is the second Repub­lican to announce his can­didacy for the seat, with the deadline for filing in April. Hillsdale Mayor Adam Stockford announced his can­didacy on Oct. 1.

“I’ve been the mayor of Hillsdale for the past two years, and before that I served on City Council,” Stockford said at the Nov. 7 meeting. “I think that municipal expe­rience is important because I see the way that things that happen at the state level affect the munic­i­pal­ities, the town­ships.”

Repub­lican Ken Delaney of Branch County said his potential cam­paign is in the pre­lim­inary stages, though he has not filed for can­didacy at this time.

“It’s good that we have at least three people running so people have some choices,” Hillsdale County Repub­lican Exec­utive Chair Steve Vear said. “Last time there weren’t many. I think we have five people running for the primary.”

Gen­erally, four or five can­di­dates run as Repub­licans for the 58th seat, Vear said, and he added that it’s likely more people will announce their can­didacy as April draws nearer.

At this time, Fink and Stockford are the only Repub­licans running for the 58th House Dis­trict. Steven Soward of North Adams has filed to seek the Demo­c­ratic Party nom­i­nation.

Incumbent Repub­lican Eric Leutheuser has held the seat for the past six years and is term-limited from running again. Leutheuser did not attend the meeting.

Julia Mullins con­tributed to this report. 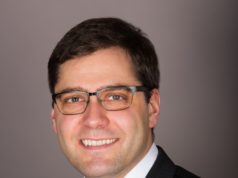