It all started with a dusty, old bike buried in the back of my garage.

“Well, it looks like this is how you’ll be getting to work, Sofie,” my dad told me a week before I was starting my new adventure.

I was interning at the Col­orado Springs Gazette this summer, and I was offered free housing downtown, a few blocks from my internship. It made sense, my dad said, for me to bike myself to work.

Up until this summer, I needed fair warning before I would go for a bike ride. I had to be pre­pared the night before my dad came knocking on my door at 5:30 a.m. if I was going to join him on a bike ride through my small desert town in Arizona.

It felt like kinder­garten all over again, learning to ride a bike in the city. But this time, instead of tying my shoelaces and remem­bering to bring my sack lunch to school, I was buckling up my helmet, zipping up my bright yellow backpack and adjusting the seat to my new whip.

I whizzed past the moun­tains and didn’t bother to give them a glance. I passed a few people, too, but I was sure I didn’t have time to say hi. I was on a mission: get to the Gazette office, greet my editor, write for my editor, say goodbye to my editor, repeat.

My assign­ments proved me wrong.

I wrote about Gene Kranz, the flight director of the first Apollo moon landing. I wrote about famous country singers, like Josh Turner.

I wrote about people who ski on the Fourth of July, and leg­endary cow­girls from Wyoming.

The com­poser and Juil­liard pro­fessor I inter­viewed said he felt like we were lifelong friends, and I even made plans to get dinner in New York City with a phil­an­thropist who started an arts fes­tival in a Col­orado mountain town.

It was after writing these stories that I realized some­thing: My bike rides gave me an invi­tation to meet fas­ci­nating people too.

The moun­tains I whizzed by, the people whose names I didn’t know, the buildings that seemed empty: I had been biking to the stories, without real­izing that I was biking right through one.

The stories I wrote in the office inspired me to look outside of myself, and my daily bike ride was the first place to start.

When I biked past the moun­tains, I now thought about the people who were climbing them, soaking in the natural world. At stop lights, I looked to my right and made friends with the people crossing the street.

Some con­ver­sa­tions were quick, but we knew we’d see each other at the stop­light the next day. Other encounters turned into some­thing much more long-term, like the friends I ended up hiking with, and whose kids I would even­tually babysit.

Instead of wheeling my bike into the Gazette office one morning, I stopped and talked to a shy mom trying to manage her four little kids. She said she and her family had moved to the city just four days ago. I told her I’d be their new friend.

She jotted down my number, and a week later I received a text from them, asking if I wanted to go hiking that night. I had made a friend the old-fash­ioned way.

Often times, I’d look at the buildings around me downtown as I biked to writing assign­ments, and think about what was hap­pening inside them. Which ath­letes stopped in to the Olympic head­quarters on Tejon Street today? How early did the bakers show up at my favorite coffee shop? I engaged with these stories that I would’ve missed alto­gether had I been driving in my car.

There was a certain beauty to my old, grey bike. I didn’t need a key, a parking spot or even a seat belt to go on an adventure.

All I needed was a helmet and a couple of wheels. 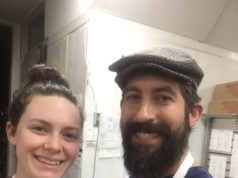 Food to ‘feed the soul’: Hillsdale alums open The Pasty Company in Colorado