For Hillsdale alumni Roxanne and Nathan Seither, taking a hike was one of the best things that ever hap­pened to them. It was there, on the coast of Lake Superior in the Upper Peninsula of Michigan, that they tried their first pasties-and fell in love.  From then on, their freezer became the home of many more homemade pasties.

At the end of January 2019, Roxanne and Nathan — who grad­uated in 2013 and 2015, respec­tively —  opened their own business called The Pasty Company in Col­orado Springs, Col­orado, and have begun selling pasties wholesale to various food busi­nesses within their local com­munity.

“Col­oradans love two things,” Roxanne explained.“Beer, and being outside. And those are two things that pasties com­pletely go well with.”

Their inspi­ration for opening a business was just the con­tin­u­ation of early dreams.

“The whole time we’ve known each other and dated, the idea of opening a business has always been some­thing we wanted to do,” Nathan said. “We’ve always loved food, and we’ve always cooked together.”

The business began with a simple con­ver­sation in a bakery. Nathan, who was studying oper­a­tions man­agement at Uni­versity of Col­orado Col­orado Springs, began to see the value in opening his own business and prac­ticing the skills he was learning in his master’s program. Sei­thers said that when he talked with a family friend from church, Steve Boon­za­aijer, who owned his own Dutch pastry shop, it finally clicked.

“I was just sitting in his bakery with him and just watching people in the shop and seeing this oppor­tunity,” he said. “Every­thing came at once, seeing what I learned at Hillsdale, learned from com­munity, and from my MBA class. It all came together.”

The idea appealed to Boon­za­aijer, too, who was hoping to add more savory pas­tries to the menu. Aside from seeing the pasty as a “good com­plement” to his existing menu, Boon­za­aijer said he also saw selling the pasties as oppor­tunity to promote the new business.

“We really liked the appeal of giving him a platform to launch his business,” Boon­za­aijer said. “Every busi­nessman has had people help him on his way and give him an idea, inspi­ration. We are no dif­ferent. When we see someone working hard, we see it as an oppor­tunity to pay it forward.”

The idea came about in October 2018. Almost imme­di­ately, the Sei­thers began taking steps to for­mally open the business. After hours of cre­ating recipes, writing out finance plans, and devel­oping mar­keting plat­forms, the couple finally received their business license at the end of January.

Immi­grating from Cornwall, United Kingdom, iron miners intro­duced savory pasties to the Upper Peninsula of Michigan in the 1800s. Due to their porta­bility and con­ve­nience, pasties were an easy meal that still pro­vided suf­fi­cient nutrients to sustain the miners throughout their workday.

Roxanne explained that the pasty is the kind of food you would find in a pub, “where you find the food of a working man.”

Made from scratch from beginning to the end, pasties demand both patience and intricacy.

After crafting a dough similar to a pie crust (“A great pasty dough has to remain flaky while also being very sturdy,” Roxanne said), Roxanne and Nathan hand-chop all the filling ingre­dients.

“We decided to grate our veg­etables and use ground meat because we feel it evenly dis­tributes our flavors more,” she added. “After our fillings are made, we wrap and crimp every pasty by hand. Then we bake them.”

To introduce the uncommon food to a brand-new audience, the Sei­thers serve pasties to their friends, family members, and even to their next-door neighbors. Whether by sending a pasty off with their mountain-biking neighbor or baking one for an ice-climbing adven­turer, the Sei­thers agreed the best way to introduce the new food is through “organic” rela­tion­ships.

“The people that we are engaging with help us manage this,” Nathan said. “It’s all very com­munity-ori­ented. We try to tap into those trusted friend­ships and try to develop the business in that way.”

He added that this organic method of mar­keting also allows The Pasty Company to con­tinue to develop and improve its product.

Rev. Don Arm­strong, the rector of their home parish, praised the couple for their cre­ative con­tri­bution to the Col­orado food com­munity.

“It’s not another ham­burger, or another taco,” Arm­strong said. “It’s very healthy, but an easily edible food for busy people. The best foods are the ones that are nar­rowed down, that are very healthy, very local, per­sonally pre­pared, expertly crafted, nothing fast, nothing mass pro­duced, and that’s exactly where the pasty fits.”

“Their incentive is to sell your product and sud­denly the buyers become your salesmen and your mar­keters all at once,” Nathan said. “We love sup­porting them. We want them to succeed, and we do our part so that people know about them. We also want to get to know our buyers, and it’s all based on the way that we live our daily lives, so as to not be disin­genuous.”

Abigail Panabaker ’13, a long-time friend of Roxanne, credited Roxanne with much of her own cooking edu­cation.

Aside from “ema­nating deep respect for the entire cooking expe­rience,” Panabaker said Seither’s gen­erosity and cre­ativity shone in the kitchen.

“She is fearless as a chef. It’s one of my favorite things about watching her,” Panabaker said. “She is adven­turous about her flavors, and her recipes were bright and deli­cious and refreshing and inspiring. The dishes that she created felt wholesome and put together. It was a com­plete expe­rience in one dish.”

Panabaker described the Sei­thers as “thoughtful, warm, and kind,” and said it was no sur­prise to her that The Pasty Company is already thriving.

“It’s the perfect brain­child of all of their strengths. Roxanne and Nathan are already business- ori­ented people. They under­stand money, they under­stand people and rela­tion­ships, and how to get people together for the right reasons,” Panabaker said. “They invest in the place that they live in and they have for a really long time. This is another way for them to give back to the area where they live.”

Roxanne is the cre­ative director of the Pasty Company while Nathan tracks their inventory and finances. Due to their success, they have not yet needed to take out a loan. Long-time friend Michael Papesh attributes the company’s success to Nathan’s driven nature.

“Nate was always strong-willed and deter­mined to start some­thing special. More than any­thing, Nathan loved good food and good company,” Papesh said. “Out of all the business ideas we’ve hashed out late into the night over drinks, it made sense that he and Roxanne would settle on some­thing that blesses the people around them.”

While at Hillsdale, Roxanne studied English while Nathan studied political phi­losophy. The two agreed that this edu­cation was for­mative to the success of their business.

“I didn’t learn about business finance, but what I did learn, from an eco­nomic stand­point, is how to under­stand the wants of your buyers,” Nathan said. “You get the pulse of what you’re looking at, and getting a liberal edu­cation helps you under­stand your sur­roundings better. If you’re learning how to think, then every­thing is pos­sible.”

Their shared love for the Hillsdale com­munity greatly influ­enced the Sei­thers to foster a new com­munity in their new hometown. Col­orado Springs lacked com­munity, so Roxanne empha­sized the need for good food to bring people together.

“We ask, ‘how is this business going to help us be good stewards of this com­munity?’” Roxanne said. “With the increased use of per­sonal tech­nology, social media, and division created by modern pol­itics, we’ve noticed that there’s a lot of detachment from com­munity. But what people are yearning for, whether they realize it or not, is com­munity.”

Roxanne said that if there is one thing in the world that people can use to relate to one another, it’s food.

“Put that together with com­munity. It’s two things that everyone needs,” she said. “Meta­physical and physical. Food feeds the body and the com­munity feeds the soul.”

In order to do this, however, the food — or pasties — have to be shared.

“For some reason, food tastes better when you’re enjoying it alongside another person. I think that’s just part of being human,” she said. 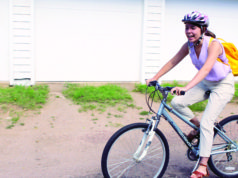 A helmet and a couple of wheels: On biking Colorado Springs