Junior Aubrey Brown and senior Jean Pen­der­grass are like other stu­dents at Hillsdale. Brown studies biology and is a res­ident assistant at Waterman Res­i­dence. She also serves as a business manager for the Winona Yearbook and works at the Roche Sports Complex. Pen­der­grass, a math major, works for campus security as a dis­patcher in the Hillsdale College Security Office.

Sur­rounded by stu­dents with lofty aca­demic and career ambi­tions makes Brown and Pen­der­grass stand out — some­thing they both acknowl­edged can be difficult.

“I’d always con­sidered going into the mil­itary, but coming into Hillsdale, I was probably with the larger per­centage of the freshman class, thinking, ‘I’m going to go to law school and become a lawyer,’” Pen­der­grass said. “But at the end of sophomore year, I started seeing the Marines coming to campus to recruit, and I started talking to them.”

Brown is from Findlay, Ohio. Her grand­father was a Marine. She said her family’s history in the Marine Corps has influ­enced her drive to pursue the Marines.

“The mil­itary has always been an interest for me. If I weren’t coming to Hillsdale it would have been a mil­itary academy,” Brown said. “I decided that I wanted more of a college expe­rience and the mil­itary after­wards instead of it being intermixed.”

Pen­der­grass is from the Los Angeles area. She said she would be the first in her close family to be in the Marines.

“Being here, everyone is going to medical school or going to get their master’s, so a lot of pro­fessors are pushing that,” Brown said. “But I can’t say there’s ever a time where I ever doubted it. It’s just very dif­ferent and hard to relate to other people sometimes.”

One of those times where Brown said it is dif­ficult to relate to others because of her career pro­jection is in her sorority, Chi Omega.

“Being sur­rounded by a lot of women is empow­ering, but it’s also some­times very dif­ficult because my interests are very dif­ferent from most,” Brown said. “The relata­bility with that is kind of dif­ficult. When people talk about long-term jobs and starting fam­ilies, my life will be the com­plete opposite of what most people’s will be. That’s the hardest part to juggle. Because I know that this is what I want, you just find time. You find time to work out, you find time to study.”

Brown went to Officer Can­didate School for six weeks during the summer between her freshman and sophomore years and will com­plete another six-week period this summer. OCS is com­pa­rable to Basic Training, which enlistees com­plete after grad­u­ating college.

“Every Marine, whether you’re enlisted or an officer, goes through the same initial basic training. Every Marine starts out the same,” Brown said. “That’s really important, espe­cially from a leader’s per­spective, because you all started from the same position and then you worked your way up.”

Pen­der­grass com­pleted OCS in one 10-week stretch, and she is preparing for Basic Training this summer once she grad­uates. In August, she will go to Quantico, Vir­ginia for six months of Basic School, where all the new lieu­tenants train to become pro­vi­sional rifle platoon commanders.

‘“It’s longer than OCS and pretty phys­i­cally demanding,” she said. “You spend five days out in the field every month.”

In addition to OCS and Basic Training, every month, Brown and Pen­der­grass go to Ann Arbor, Michigan for Marine training and physical activity.

Both Brown and Pen­der­grass agreed that the Marines appealed to them because of the array of func­tions it serves and the ver­sa­tility that comes with the title.

That ver­sa­tility, Brown explained, includes activity on the water, in the air, and on the ground. At Basic School, enlistees are tested phys­i­cally, aca­d­e­m­i­cally, and in lead­ership. They are then ranked on the Mil­itary Occu­pa­tional Spe­cialty list, which deter­mines their spe­cific duty and function in the Marine Corps.

Perhaps the most rig­orous portion of becoming a Marine are the physical chal­lenges. Every three months, Brown and Pen­der­grass take the Physical Fitness Test, which involves pullups, situps, and a three-mile run. In addition to the periodic tests, they stick to a workout plan which they do on their own.

“Some­times it’s tough because last semester, I hit the gym at 6 a.m. every morning,” Pen­der­grass said. “It’s almost like being a college athlete.”

A perfect score in the PFT for Brown’s age range con­sists of 105 situps in two minutes, nine pullups, and a 21-minute three mile run.

“Running is crucial to your success as a Marine,” Brown said. “I am in the gym five to six times a week to be phys­i­cally pro­fi­cient at all kinds of workouts since the physical part of training varies greatly. Endurance is a huge factor in success, so hitting the gym often is key.”

Perhaps even more rig­orous than the physical fitness expec­ta­tions  is the mental toughness that the process demands.

“There’s plenty of movies that depict what Basic Training is like, and that’s exactly what it is like. You’re getting con­stantly screamed at with no sleep, and every­thing you do is wrong; you’re a garbage human, and then you’re expected to perform phys­i­cally 24/7,” Brown said. “But there’s a light at the end of the tunnel. Once you graduate college and become an officer and get to be that role model or leader for other people, it’s a very cool thing. It’s a lot in the moment, but thinking in the long term, you’re getting there.”

Amid the business of college life and the relentless effort it takes to prepare for the Marine Corps, one phrase comes to Brown’s mind.

“The best advice I’ve gotten, and this is a uni­versal truth, is to ‘Embrace the suck,’” Brown said. “That is applicable to every­thing in life.”

Although the Marine Corps does not tol­erate any dis­re­spectful behavior toward women, Brown said being in the minority as an aspiring Marine is some­times met with opposition.

“I have faced many men and women who are shocked that my goals are not to become a mother, stay at home to raise children, and be a dutiful spouse,” Brown said. “I con­stantly get asked if I am sure this is what I really want to do, and that I am too pretty to be put in harm’s way. Tra­di­tional gender roles are still a hot topic in the mil­itary, just not in my book.”

Both Brown and Pen­der­grass have an idea of where they’d like to be in 10 years, but they also know that life can change at any moment, and today’s plans might not translate into tomorrow’s reality.

For now, they know one thing is for sure.

They are the few. They are the proud. And before long, they will be the United States’ next Marines. 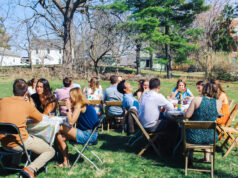 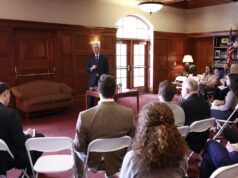 ‘A life to praise and to prize’: Batman comes to Hillsdale