The Hillsdale College women’s tennis team com­pleted a clean sweep of Ursuline College 7 – 0 before losing to Walsh Uni­versity 1 – 4, clinching a spot in the G‑MAC Tour­nament as the fourth and final seed.

“Ursuline is not nearly as hard of a match as Walsh is, so we were kind of expecting to beat Ursuline then have a full line up so it was kind of a given,” Luna said. “We just had to show up and hit the ball and I knew we were going to win.”

Freshman Libby McGivern said she was pumped for the matches going into the weekend.

“I felt excited about the com­pe­tition going into the weekend,” McGivern said. “I hadn’t had my best per­for­mance the pre­vious weekend and I was feeling much better about my game and the team’s energy so I was excited for a better match.”

Hillsdale’s squad com­pleted a perfect sweep of Ursuline. In both singles and doubles, each player won their match in straight sets without giving up a single game. Luna won her doubles match with Sophia Spinazze against Megan Fortney and Alex Pig­natiello, and won her singles match against Ursuline player Alex Pig­natiello 6 – 0, 6 – 0.

Luna said one of her favorite moments during the match against Ursuline was when freshman Melanie Zam­pardo played what she called a golden set.

“I thought it was pretty cool that against Ursuline, Melanie had a golden set which means she didn’t lose a single point in the entire set,” Luna said. “That’s hard to do even against a team that’s not that great.”

Despite the overall loss against Walsh the fol­lowing day, several women had vic­tories in their indi­vidual matches.

“The doubles match Mel and I played against Walsh was par­tic­u­larly mem­o­rable because we had been down 3 – 4 and were able to break the other team’s serve and then hold ours, which was a huge turning point in the match for us,” Hackman said.

McGivern said despite her losses, she was proud of her per­for­mance against Walsh.

“In my match against Walsh even though I lost I’d say a high­light was fighting back the third set after dropping the second because the weekend before, my fight just wasn’t there,” McGivern said. “I was proud of myself for pow­ering through even though I was phys­i­cally hurting.”

McGivern said she wishes she had used her slices better against Walsh.

“I think I could have done more to change the pace and stay in points longer when she was running me around,” McGivern said. “I also wish I would have hit more swinging volleys off her high balls to take time away and end the point.”

Luna said she wishes she had stayed more men­tally focused.

“I wish we had closed the doubles match in Walsh because we were up, and stayed calm and didn’t let it bother us,” Luna said. “When we were up, a bunch of people came and it got in my head.”

Heading into the post­season, McGivern said she is proud to see the team’s improvement.

“I think this has been a great season for the team and has really shown how strong we are this year because last year the team was extremely injured at this point in the season,” McGivern said. “This season, we have been extremely healthy both as a team envi­ronment and phys­i­cally. I am excited to see how this season ends.”

Hillsdale made the tour­nament last year as the No.4 seed, and knocked off No.1 Tiffin and No.3 Walsh on their way to a con­ference tour­nament win.

The Chargers will play next against No.1 seed Findlay for the G‑MAC tour­nament semi­final. The game will take place at Findlay on April 22, 2:30 p.m. 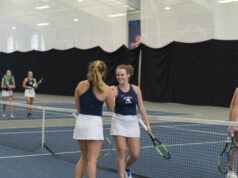 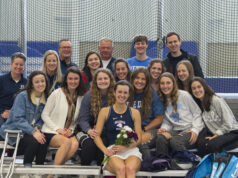 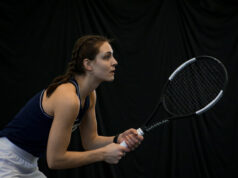