The Hillsdale College softball team has won 10 straight games after going 4 – 0 on a home­stand against Trevecca Nazarene Uni­versity and Ken­tucky Wes­leyan College. Senior catcher Madison Stoner led the team, winning G‑Mac Position Player of the Week for the second time in her career, and the first this season.

The Chargers defeated Trevecca Nazarene 1 – 0 in the first game, with only six com­bined hits. Senior third baseman Elaine Townley hit a leadoff double in the bottom of the fourth inning before moving to third after a wild pitch. On a pitch the catcher missed, Townley reached home to notch the only run of the game. Freshman Joni Russell pitched a com­plete shutout for her 11th win of the year, striking out eight batters with only two walks and three hits.

In the second game against Trevecca, the Chargers won 9 – 5 in a shortened game due to rain. Hillsdale scored nine straight runs, with Stoner hitting an RBI single in the bottom of the first. With two outs in the bottom of the second, Townley hit a two-run single, scoring senior out­fielder Reagan Gen­siejewski and sophomore shortstop Hailey Holtman. Two batters later, fifth year senior Madison Rathbun hit a two-run double to score Townley and freshman out­fielder Oliva Latimer.

“Some­thing we’ve really had to work on throughout the season, and this was true of our games Friday against Trevecca, is focusing on the “con­trol­lables” and not letting cir­cum­stances outside of our control dictate how we play,” Latimer said. “We’ve had to play in tough weather con­di­tions a lot this year, and it can be really hard to fight through that and not let it dictate how we play. Espe­cially against Trevecca, we really had to buckle down and be men­tally tough, to just take every­thing one play at a time and to focus on doing what we need to do to get the wins.”

Townley hit another RBI single scoring Holtman before Stoner was walked to put the Chargers up 7 – 0. Senior second baseman Kasidy Carson was hit by a pitch with the bases loaded to add another run before Latimer hit an RBI single to score Gen­siejewski. Trevecca scored five runs in the top of the fifth inning to make the game close before it ended early due to the rain, with no chance to resume later.

Sophomore Erin Kapteyn got her eighth win for the Chargers, fin­ishing with four strikeouts, six walks, and four hits allowed.

On Sat­urday, the Chargers put up six runs in the bottom of the first inning, led by Gensiejewski’s two-run single with Carson and senior out­fielder Natalie Stepa­nenko adding RBI singles.

Ken­tucky Wes­leyan fought back in the top of the third with 3 runs before tying the game in the top of the fourth inning. Gen­siejewski responded with another two-run single as well as Latimer scoring on an error. Stepa­nenko scored on another error before junior catcher Jenna Can­talupo was walked with the bases loaded to score Townley.

Latimer hit a two-run double in the bottom of the sixth to put the Chargers up 13 – 6, and Ken­tucky could only muster one RBI in the seventh before the game ended.

“The pitching staff worked as a team this past weekend,” Russell said. “When one pitcher was strug­gling another would step in and have their back. It was really cool to see all the pitchers work together and the hitting came together to push us to two wins.”

In the second game, Stoner and Rathbun got the Chargers to a 2 – 0 lead in the first before the offense erupted in the third inning with seven straight hits. Stoner and Rathbun hit doubles, sophomore catcher McKenna Eichholz and Townley hit two-run doubles with Can­talupo, Holtman, and Gen­siejewski each hitting RBI singles.

“Ken­tucky Wes­leyan was a test of our endurance and I’m proud that the team was able to come back the day after Trevecca and get another sweep,” Townley said.

The Chargers now play two games at Ashland Uni­versity on Sat­urday, April 23 before taking on Ursuline College at home for Senior Day, with eight seniors being honored between the first and second game against Ursuline.

“This weekend’s games went really well,” Carson said. “We were able to battle through the ele­ments and come out on top— I think it’s a tes­tament to how our team can handle adversity and keep our focus on what needs to get done. Espe­cially since we’ve never swept Ken­tucky Wes­leyan before, it felt really good to be able to accom­plish that goal, one inning at a time. If we take that one-step-at-a-time approach to the end of con­ference season and into G‑MAC’s, I think we’ll be able to handle any­thing thrown our way.” 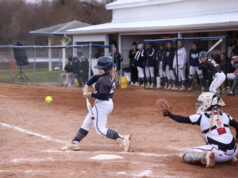 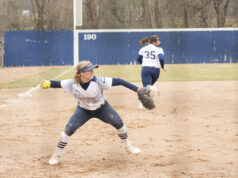 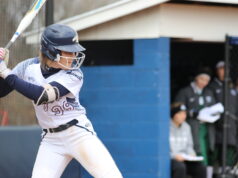