The NFL intro­duced its taunting penalty more than two decades ago to prevent dis­trac­tions during games. This season, however, the penalty has become its own distraction.

It’s time for the NFL to bring back the taunt.

Before the season started, NFL Com­pe­tition Com­mittee Chairman Rick McKay announced a new policy in a video: “Game offi­cials have been instructed to strictly enforce the taunting rules, and players and coaches are reminded that two taunting penalties com­mitted by an indi­vidual player will result in auto­matic disqualification.”

In other words, the league’s taunting rule hadn’t changed, but ref­erees received instruc­tions to enforce it more vigorously.

And that’s what they’ve done: In the second week of this season, ref­erees threw eight flags for taunting, each one a poten­tially game-changing penalty of 15 yards as well as an auto­matic first down. This ties the mark for the most taunting penalties in a single week since 2000, which is as far back as the ESPN Stats and Infor­mation Database goes. Sim­i­larly, the 11 taunting penalties called between the first two weeks were just one shy of the most across any week one and two since 2000.

Taunting usually takes the form of flexing on an opponent after making a sig­nif­icant play or spiking the ball in the general direction of defenders after beating them for a big gain.

Plays like these fire up crowds. They’re why we enjoy football games.

“I love the fire of com­pe­tition,” Indi­anapolis Colts coach and former backup quar­terback Frank Reich told The Rich Eisen Show. “I want to dom­inate the opponent in every way: phys­i­cally, men­tally, on the score­board. I want to embarrass them. We want to destroy the opponent.”

Fans enjoy watching players express their emo­tions and show their desire to dom­inate, espe­cially if it means flexing over oppo­nents whom they have just laid out, or spinning the ball in the turf after picking up a big first down.

One person’s taunt is another’s cel­e­bration — an expression of joy that makes this sport joyful to watch.

According to the NFL rule book, part of the purpose for the penalty lies in the use of “baiting or taunting acts or words that may engender ill will between teams.” The league wants to prevent a series of esca­lating per­sonal attacks that might end with an after-the-play physical alter­cation. This is rea­sonable. If I want to see some of the most gifted ath­letes on the planet brawl, I can watch UFC or the NHL.

Despite this, watching teams and players “engender ill will” makes the viewing expe­rience more exciting for the fans. Ref­erees can make dis­tinc­tions between real vio­lence and per­sonal rivalries like the back-and-forth duel between cor­nerback Josh Norman and receiver Odell Beckham Jr. in the 2015 – 16 season. Storied team rivalries, such as the lop­sided affair between the Lions and Packers, adds the stakes of bragging rights to the game.

The NFL has declared war on all of this. Using three hours of your Sunday afternoon to watch the Lions in another winless season is dif­ficult enough. Stopping the game when a player throws up a peace sign on his way to a touchdown or when a player calls his opponent a mean name is just plain unnecessary.

The NFL faces a choice. It can reverse its ban, or it can suffer the taunts of fans who will refer to the NFL by its alternate acronym: the No Fun League. 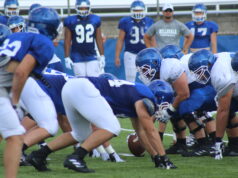 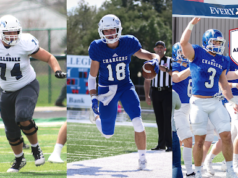 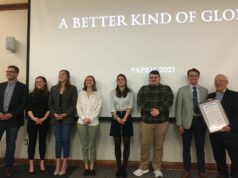