The Hillsdale College women’s tennis team won the con­so­lation doubles title and made it to four other con­so­lation bracket semi­finals at the Inter­col­le­giate Tennis Asso­ci­ation Midwest Regional last weekend.

Senior Sophia Spinazze and sophomore Julia Wagner lost their first match in the B doubles bracket, but won three straight to earn the con­so­lation title, winning 8 – 2 in the semi­final and the final.

Two Chargers were forced to withdraw with an injury after winning mul­tiple matches. Senior Sarah Hackman won four straight matches in the A singles before with­drawing at the con­so­lation semi­finals, and junior Canela Luna made it to the con­so­lation quarterfinals.

Luna and freshman Libby McGivern made it to the A doubles con­so­lation semi­finals before being bounced by Drury 8 – 2.

“I think we def­i­nitely needed the match play to work out some kinks in our games because a lot of us haven’t com­peted in a few months or are coming off injuries,” Luna said.

The tennis team only plays four matches in the fall in prepa­ration for the spring season, and Hackman said the Regional helped prepare the team.

“Everyone was able to compete in some really great matches,” said Hackman. “I think it helped set us up for a really strong fall season, allowing us to get back into the swing of things.”

Hackman, one of three seniors on the team, said she is excited for her final season.

“Going into the season I hope that I can really enjoy every minute of the time I get to spend with the team on and off the court,” Hackman said. “It is so easy to get caught up in the busy day to day of classes and homework and overlook the small moments. This year more than ever I think it will be important for me to be present in the moment.”

Spinazze said her goal in her final season is to set the tone for the rest of the team.

“My goal is to be a good leader and role model and con­tribute however I’m needed to team wins,” Spinazze said.

“Against Wayne I think getting the doubles point will be a key com­ponent,” Hackman said. “Last season it was where we tended to struggle most. Starting this year we have put a lot of focus on doubles in practice and I think it will pay off.” 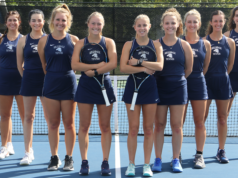 Tennis finishes out the fall season with a sweep