Last year was a his­toric season for the Hillsdale College men’s tennis team, and it left them wanting more. For the first time in program history, the men’s tennis team qual­ified for the NCAA Tour­nament, but had to forfeit two matches due to COVID-19 and fell to the Uni­versity of Indi­anapolis Grey­hounds 4 – 0.

The NCAA tour­nament was truly an amazing expe­rience,” sophomore Brennan Cim­peanu said.  “It was espe­cially enjoyable that it was our first time since our program reboot that we have made the national tournament.”

After the Tour­nament, the Chargers were ranked 30th in the Nation in the Oracle/Intercollegiate Tennis Asso­ci­ation Division II poll. Junior Tyler Conrad and Cim­peanu ranked 16th and 17th respec­tively in singles for the Midwest Region.

Conrad, who jumped from No. 5 singles in 2020 to No. 1 singles last year, said the expe­rience will help him get better this season.

“Last year was dif­ficult having to learn how to play a high position, but now I know how to win against that level of player, and I plan on uti­lizing that expe­rience to ground myself and stay con­fident,” Conrad said.  “My per­sonal goals for this upcoming season are to win more matches than last year and really be a nearly guar­anteed point for our team”

“Our goals are to win the GMAC, make it to the round of 16 in the NCAA Tourney, and finish in the top 25 in the nation,” Turner said.

“This season we have to keep up the intensity in practice and in matches,” Gilbert said. “We can’t get too com­fortable espe­cially since we have a target on our back now.”

Gilbert said he has two per­sonal goals this season.

“My per­sonal goals are to firstly solidify my spot in the lineup and sec­ondly improve my record from last season,” Gilbert said. “Espe­cially if I play lower I feel like there is no reason why I can’t go unde­feated in regional play against players of similar lineup spots.”

Conrad said that the NCAA Tour­nament set his sights on his goals next year.

“It was a beau­tiful low-pressure cul­mi­nation of our team’s suc­cesses last year, and playing the tour­nament gave us a glimpse at what we’re playing for this year: making it to the sweet 16 in Arizona,” Conrad said.

The team only grad­uated one senior, No. 6 singles and No. 2 doubles Gabe Katz.

“His work at the #2 doubles spot last year was a huge key to us having such a suc­cessful year,” Turner said. “We still have a pretty young team this year but I feel we have enough leaders on the team to fill the void of losing Gabe.”

The Chargers play two tour­na­ments in the fall: The Charger Men’s Tennis Invite this weekend and the ITA Midwest Regional Sept. 24 – 26.

“The two tour­na­ments this fall are huge for our devel­opment,” Turner said. “It gives me a chance to see how the freshmen look and what we need to work on overall as a team. The com­pe­tition will be very high this fall so it will be great to see how we compete against some strong teams that we won’t see in the spring until maybe the NCAA Tournament.” 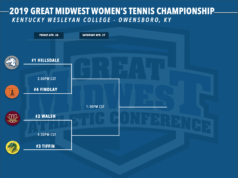