It’s said that when you love some­thing, set it free, and if it comes back, it was meant to be. This is the case for many Hillsdale alumni who come back to work at their alma mater, proving true their love for the white and blue.

Blake Faulkner, Jason Gehrke, and Tim Polelle are three recent alumni who decided to use their edu­cation to pour into the school that formed them. Faulkner teaches rhetoric and public address, Gehrke teaches history, and Polelle teaches fifth grade at Hillsdale Academy.

“I learned to love learning at Hillsdale,” Gehrke said. “I made the most enduring friend­ships here, and Hillsdale became for me a kind of second home.”

Faulkner grad­uated in 2012, and also went on to com­plete his masters in 2015 and doc­torate in com­mu­ni­ca­tions in 2021. While getting his Master of Arts in bib­lical studies at Cincinnati Christian Uni­versity, he preached at a small church for three years. There he fell in love with Sunday school, and sub­se­quently reeval­uated his career path.

“Turns out pas­toring is not mostly teaching. There are a lot of other things, which are important, but not what I wanted to do,” he said. “What I figured out was that I liked bridging the gap between myself and the audience and whatever material we were doing. That’s what I really liked.”

Gehrke grad­uated with a bachelor’s degree in history in 2007. He earned a master’s in religion in 2010 and a PhD in Reli­gious Studies with spe­cial­ization in Ancient Chris­tianity in 2017. After meeting his wife at Hillsdale, the two went on to travel and Gehrke studied all over: Con­cordia The­o­logical Sem­inary in Indiana, Uni­versity of Cam­bridge in England, and Stras­bourg Uni­versity in France, to name a few. Gehrke also taught at Val­paraiso Uni­versity from 2017 to 2019.

“Every insti­tution is spe­cific, and each has a char­acter that reflects its tra­di­tions that made it,” he said. “For other schools, their charters can be anti­quated, his­torical relics, but here it’s still effective in ordering our ultimate purpose.”

Pollele grad­uated from Hillsdale College in 2019 with a double major in history and phi­losophy and a minor in Spanish. He went on to work within Hillsdale’s Barney Charter School Ini­tiative. He taught fifth grade for two years in Idaho before coming back this year to teach fourth grade at Hillsdale Academy.

“Everyone here is pretty focused, and you can bet some of them are thinking big thoughts, right?” Polelle said. “So, sim­i­larly, even in ele­mentary school, the kids have a sense that this is a place for real learning, basi­cally, that they can begin to reflect and think in a way they haven’t really done before.”

Even with their advanced degrees and expe­ri­ences, these men still recall stories and details from their time as a Hillsdale student. Gehrke rem­i­nisced on “roman­ti­cizing the good old days when the ceilings fell down and the water leaked,” in the old Kresge building that was torn down, and when Hillsdale College pres­ident Larry Arnn sat with him during one lunch hour.

“We were in Saga,” Gehrke said. “I saw this man who looked older than me. He was holding his tray like he was looking for a place to sit, so I invited this ‘visitor’ to sit down. I asked who he was and he said, ‘The pres­ident.’ I thought he meant the pres­ident of the United States.”

Another lasting tra­dition is the swing dance club, which Faulkner attended from sophomore year until he grad­uated. In addition to cul­ti­vating a love for the art of swing dancing, “the big jus­ti­fi­cation for going was that it was two-thirds girls and one-third guys.”

Polelle managed the GOAL program during his time as a student after working with the humane society for most of his undergrad years and plans on going back sometime in the future.

“​​It was just really pleasant to be around a bunch of animals,” Polelle said. “It was much like teaching, you know, just happy little crea­tures, and you take care of them, and it’s pretty simple and straightforward.”

When Faulkner was a freshman, the Grewcock Student Union was brand new. Polelle walked the quad for years while Christ Chapel was still under con­struction. Gehrke was a part of the first gen­er­ation to try out Lane and Kendall halls. Life on top of the hill has expanded, while life within the class­rooms has remained con­sistent, he said.

“In terms of identity, even in terms of a lot of faculty, I’d say Hillsdale hasn’t changed, which is kind of its strength,” Faulkner said. “Even the stu­dents, you know? Obvi­ously, there are dif­ferent people here because every four years that changes, but even when I’m teaching I can rec­ognize a lot of cul­tural sim­i­lar­ities. I can’t say it’s changed in the most important ways.” 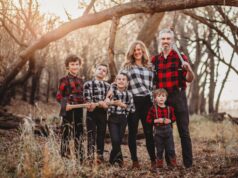 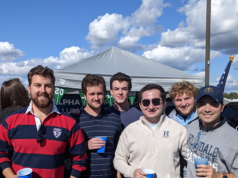