Hillsdale’s fifth men’s fra­ternity, Mu Alpha, is the only one in the United States. While it’s tech­ni­cally not a fra­ternity at all, don’t let it’s members hear you say that; to them, it is.

An hon­orary almost entirely in name only, Mu Alpha is one of two men’s music orga­ni­za­tions cur­rently on campus, and the only one exclusive to Hillsdale. It was founded in 2002 when it split from Phi Mu Alpha, a national music fraternity.

“Sometime in the late ’90s con­ver­sa­tions started to pop up within the Phi Mu Alpha chapter at Hillsdale,” said junior and Mu Alpha trea­surer Gabe Kot­tkamp. “At the time, there was a lot of dis­sat­is­faction with the way that nationals was man­dating that rituals go. In 2002, 22 of the 24 active members voted to sep­arate from Pi Mu Alpha and the remaining two members abstained.”

“We were tired dealing with the national chapter dues,” Bykerk said. “We’re basi­cally the  America of frats, tired of paying taxes.”

Senior Sebastian Pestritto said that the process took involved much delib­er­ation and took over the course of a year to go into effect. It also involved sub­stantial con­ver­sa­tions with Phi Mu Alpha national, Phi Mu Alpha alumni, and the college, espe­cially Dr. Arnn and the provost.

Although Mu Alpha is an hon­orary, it func­tions much like a fra­ternity. Members are required to adhere to strict pin day attire and attend weekly chapter meetings. Most impor­tantly, Mu Alpha, like the other fra­ter­nities on campus, has its own house which they acquired when they split from Phi Mu Alpha.

“Unlike how fra­ter­nities work at most col­leges, the admin­is­tration owns all the fra­ternity houses at Hillsdale,” Pestritto said. “When the sep­a­ration occurred, we were the only music fra­ternity on campus since we didn’t have a Phi Mu Alpha chapter anymore. The admin­is­tration basi­cally just trans­ferred some of their assets on campus to us, including the house.”

After 19 years, Pestritto said the house has become some­thing of a giant antique store. Included in its inventory are two organs, a piano, a promi­nently dis­played Blues Brothers poster, a frisbee dating back to 2000, every concert poster since before Mu Alpha split from Phi Mu Alpha, a tapestry depicting a Hun riding in a chariot, and a bottle of fish sauce that expired in 2013.

“Because we have so much weird stuff, I don’t even know where most of it came from,” Bykerk said. “People leave things here thinking funny stories will be told about them, but those random stories are even­tually forgotten.”

However, not all of Mu Alpha’s stories have been for­gotten. One par­ticular story — the ‘Ele­vator Episode of 2016’ — lives on in infamy.

“They basi­cally destroyed the ele­vator in Lane,” Bykerk said. “The entire exec­utive board was in the ele­vator and two very large men decided to jump as it was going down. They ended up being trapped in the ele­vator for over an hour and a half.”

After only a few minutes of con­finement, one Mu Alphan took to Facebook to live stream the har­rowing expe­rience. They remained trapped until an ele­vator repairman from Jackson, Michigan finally freed them.

According to Pestritto, every gen­er­ation of Mu Alphas has been told the story since as a reminder “to not be stupid.”

Over the years, Mu Alpha has estab­lished many traditions.

“Our biggest tra­dition is probably the ser­e­nades which we do every semester,” said Matthew Holze, the group’s song master. “We go to the girls’ dorms and the sorority houses and sing a couple of ser­enade songs. Every spring since we’ve started, we’ve always done ‘Kiss the Girl’ from the ‘Little Mermaid.’”

Addi­tionally, Mu Alpha hosts numerous con­certs throughout the year as well as an annual pig roast. They have even invented their own sport, “frolf”, a cross between frisbee and golf. Essen­tially disk golf without baskets, players simply aim for the statues, trees, and other land­marks which com­prise the 18 hole course around campus.

“We’ve ‘frolfed’ at all hours of the night,” Kot­tkamp said. “It always ends with chucking the frisbees at the door of Koons as hard as pos­sible. It made more sense when Koon was a guys’ dorm, but tra­dition stands, so we still do it.”

Of course, not all of Mu Alpha’s tra­di­tions have remained standing since the fraternity’s founding. Before 2015, members were required to wear fedoras as part of their uniform for con­certs and ser­e­nades. Since then, they have opted for ties and pins. Bykerk said the fra­ternity insti­tuted the change because the internet culture around fedoras took an unex­pected leftward turn.

As the only chapter in the nation, Mu Alpha has made great tra­di­tions and mem­o­rable stories that live on within the fra­ternity, Pestritto said.

“We have a very strong tra­dition of oral sto­ry­telling,” Pestritto said. “It’s great to hear about the guys who came before us, and it’s great to know that the gen­er­a­tions who come after us will hear our stories.” 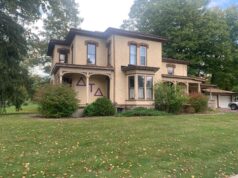 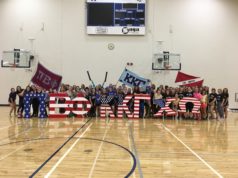