“If you come back on Thursday, you can get your picture with a prize winner,” he said con­fi­dently, leaning back in his folding chair.

For Bowman’s family, coming back to the Hillsdale County Fair this week is part of a more than 80-year-long family event.

Bowman explained that his pregnant cows will show best.

“The udder is important,” he said.

John’s brother, sister, and niece all show their farm animals as well.

Just across the barn, his grandson Max Hughes of Jonesville, 15, is showing his Hol­stein Friesian cow named Big Bird.

“She was the biggest out of the herd,” he said.

The Bowmans aren’t the only long-standing family to come to the fair.

Dena Erwin of Jonesville has rep­re­sented J&D Hon­eybees at the fair for almost 30 years.

She said she started the company with her husband when they hap­pened upon two bee­hives when clearing land for their home.

Since then, she has sold beeswax goods, from Nativity sets to candles. She also sells fla­vored honey, including a cin­namon whipped variety.

For Kay Aube of Osseo, who sells country home decor and homemade candles, the fair is more than just business. Since she closed her Country Junction store in Allen two years ago, she said the fair has become the primary way for her to interact with customers.

As a 15-year veteran of the fair, she said this year’s crowds have made it suc­cessful so far.

Jeff Bruce of Hastings, who sells tasty treats like candied almonds and funnel cake, said it’s been a great year for food vendors.

He said that after a year away from the fair due to the COVID-19 pan­demic, people are anxious to get out.

Bowman also said he has noticed a marked increase in fair traffic, espe­cially on Sunday and Monday.

Jean Stauffer and her husband of Angola, Indiana said this year’s fair has been very good. Jean, now 86, said she has been coming to the fair for more than 80 years.

“We came for old time’s sake,” she said. “I look for rings, and my husband looks for tractors.”

Despite the increase in guests at the fair, Aube said there are a lot of vendors missing this year.

“A lot didn’t come because of health reasons,” she said.

“They are really down in numbers,” he said.

Nev­er­theless, Aube said she hopes next year some of these vendors will come back again.

“We’ll work on it,” she said. “Next year I hope this whole fair will be full again.” 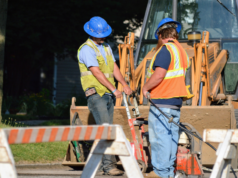 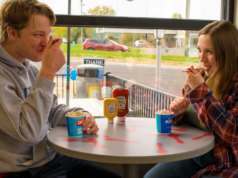