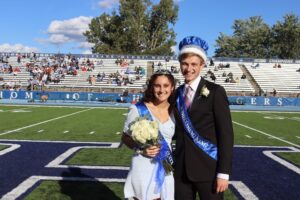 When she was named this year’s home­coming queen, Maya Kani­aupio was sur­prised and humbled.

“There are so many girls on the court that have par­tic­i­pated in won­derful lead­ership oppor­tu­nities, are very involved on campus, are very well loved, and are just girls of high-char­acter,” Kani­aupio said.

She has been involved throughout her time on campus, including being a director of GOAL pro­grams and being the pres­ident of the Pan­hel­lenic Council. She is also the senior class vice president.

Kaniaupio’s expe­rience in the GOAL program has encouraged her to pursue non-profit administration.

“I’m really inter­ested in maybe teaching after I graduate and then even­tually going into sec­ondary school admin­is­tration,” said Kaniaupio.

Even­tually, Kani­aupio wants to return to her home state of Hawaii to live on a little farm and raise her family, she said.

Hillsdale has taught her important lessons about engaging crit­i­cally in deep and ful­filling con­ver­sa­tions with her peers, she said.

“I think it’s espe­cially beau­tiful being here; one thing that I found to be unique is that we all have dif­ferent beliefs on things,” she said. “But we’re able to engage in a lot of thoughtful discussion.”

For Brennan Nokelby, being named home­coming king this past year has filled him with grat­itude, but hasn’t changed his ambitions.

“It’s fun, people are very kind to have voted me in. It feels good, but it doesn’t feel too dif­ferent,” Nokelby said.

Among other campus activ­ities, Nokelby is a head RA in Simpson Res­i­dence, and leads a crew for A Few Good Men. As a double major in history and religion, he is con­sid­ering graduate school in either the­ology or history.

Even­tually, Nokelby wants to raise a family and pursue the Lord, perhaps in his home-state of Nebraska, he said.

“I’m not a very ambi­tious person, I’m not like D.C. or bust, or any­thing like that. I’m very content with the small things in life,” he said.

“I’ve learned part of what it means to be a godly man, and the impor­tance of the liberal arts, of edu­cation, of family, and of faith,” he said. “The longer I’ve been at Hillsdale, the more that I just want to give back as much as I can.”

For Michaela Stiles, being crowned home­coming queen was the pleasant end to a hard senior year after the COVID-19 pandemic.

“I felt so honored to get to stand next to Jonathan Burton, who I just have so much respect for,” Stiles said. “And then to look out at the student body on the most incredible campus. It’s just surreal.”

Stiles received a full-ride schol­arship to Michigan State Uni­versity to study vocal per­for­mance, and has started her first aca­demic year there. She also works part-time with a children’s and an adult’s choir as a pas­toral and music assistant at her local church.

“My teachers are amazing,” she said. “I feel like I’m really being stretched artistically.”

Even in the few short months since she left Hillsdale, Stiles says her voice has matured a lot. Even­tually, she plans on per­forming pro­fes­sionally and hopes to work with a big opera company.

Her expe­rience at Hillsdale has made Stiles realize that Hillsdale is unique, and has made her tran­sition to MSU bit­ter­sweet, she said.

Unlike most past home­coming kings, Jonathan Burton can still be found on Hillsdale’s campus taking a fifth year to finish his Spanish and pol­itics double major. Burton hopes to become a mil­itary trans­lator after graduation.

As a student, Burton has been involved as an RA for three years, he played football, was on last year’s Legacy Board for the senior class gift, and was involved in various varsity christian bible study groups.

Being crowned home­coming king was an affir­mation for all of the work Burton has put into being involved on campus.

“Seeing people respond that way was very grat­i­fying and hum­bling,” he said. “It’s cool, but it’s not the most important thing.”

Burton believes that the lessons he learned in dis­ci­pline and sched­uling that came with his busy schedule at Hillsdale will serve him well post-graduation.

“I’ve become very com­fortable with being dis­ci­plined, and I hope that will translate well in the mil­itary,” he said.

Burton con­sidered the brevity of the award when asked about his message to his successors.

“I’d like to con­grat­ulate them, and also to remind them that this a very tem­porary and short-lived notch on, hope­fully, a long lifespan of achieve­ments,” he said.

When Christa Green and Reagan Dugan won Home­coming King and Queen in the fall of 2019, they were about to embark on a much longer home­coming reign than they could have imagined.

“It was so very sweet,” said Green. “In some ways, looking back, it’s almost sweeter after the senior year that we ended up having, because it was such a normal fall and obvi­ously such a non-normal spring.”

Green was an RA for two years, including a year as head RA in Mauck, as well as a House Director in the Suites. She received her home­coming nom­i­nation through the Kappa sorority.

“It was sweet because I cared for so many stu­dents, and they were such a big impact on me, and it was a sweet gesture to realize that I was an impact on them,” Green said.

Green, who lives in Portland, Oregon with her husband Alexander, is cur­rently interning with the Catholic Com­munity Ser­vices as a mental health ther­apist for kids from age 5 – 17 with severe mental ill­nesses, while working on her Master’s in social work from George Fox University.

“My long term dream would be to open my own private practice and work as a ther­apist or coun­selor for women and children,” Green said.

Green was partly inspired to pursue social work with women after her expe­ri­ences helping her fellow stu­dents at Hillsdale.

“I think since grad­u­ating and seeing other col­leges, it really gives me a renewed awareness of how unique and good Hillsdale is at cre­ating a good culture, I would love to try and recreate that good culture,” she said.

Reagan Dugan jokes that being home­coming king was the last piece he needed on his resume to land his job as a Hillsdale admis­sions counselor.

“In our admis­sions office we have Matt Sauer and Alexander Green, who were both home­coming kings, so that was my in on my resume,” he said.

Dugan lived in Simpson for four years while working for admis­sions, Campus Rec, and the Women’s Bas­ketball team.

“I mean, at the end of the day, I was honored that people wanted to give me that honor,” Dugan said. “It really meant a lot, I’ve tried to give a lot to Hillsdale, so it was cool to be up there.”

Dugan is now an admis­sions coun­selor, recruiting in Texas and the sur­rounding area. He moved to Dallas over the past summer after working for a year from Hillsdale.

His expe­rience at Hillsdale has served to teach him a lot about the way to build and foster com­munity and relationships.

“It’s hard to do when you’re not in Hillsdale, but finding people that are pas­sionate about similar things is really key,” he said. “Hillsdale gave me a great model and a good foundation.”

Although she’s married and teaching kinder­garten in Ten­nessee, Kendra Lantis ’19, now Gensler, recalls being crowned as home­coming queen in 2018 as a fun moment filled with gratitude.

“I was very humbled and very thankful that people thought of me in that way,” Gensler said.

Gensler and her husband, who were married shortly after her grad­u­ation in 2019, moved to Ten­nessee per­ma­nently after his work became remote.

“My school is in Franklin, and we’re very involved in our church, we love it down here,” she said.

Gensler is deeply grateful for Hillsdale and the rela­tion­ships she made here.

“Once you leave Hillsdale, you are con­tin­u­ously reminded how thankful you are that you went there, it’s a won­derful place where you have four years to just grow, be humbled, and just soak in all the knowledge and friend­ships, and char­acter-building that happens,” she said.

Gensler’s advice to future home­coming kings and queens focused around the sense of grat­itude and humility that she felt after being crowned.

“Take it as an honor, it’s a fun day, it’s some­thing to have fun with,” she said. “It doesn’t really change any­thing after­wards, I would just say to be very thankful and humbled.”

When Alexander Green ’19 received the home­coming crown in 2018, he was sur­prised and grateful for the recog­nition of the rela­tion­ships he had built as an RA during his time at Hillsdale.

“It was exciting, and just felt like a real sweet con­nection with the other stu­dents at the time,” Green said.

Among his other activ­ities, Green was an RA and head RA in Nied­feldt res­i­dence for two suc­cessive years.

“It was some­thing that I cared about, and I was thankful that other people seemed to rec­ognize that,” he said.

Green is cur­rently working for the college as an admis­sions coun­selor in the Pacific-Northwest region. He lives in Portland, Oregon with his wife Christa Green, who grad­uated in 2020. He will be starting his master’s degree in char­acter edu­cation at the Uni­versity of Birm­ingham in the United Kingdom.

“We’re both inter­ested in working in higher edu­cation, perhaps as Deans of Stu­dents someday,” said Christa Green ‘20. “What we saw at Hillsdale and the rela­tional con­nec­tions that hap­pened there is some­thing we really hope to per­petuate wherever we go.”

Green cher­ishes the memory and imparts some of his mom’s wisdom for the future home­coming king and queen.

“File it away for times when life gets dif­ficult, then you can remember some sweet moments of your time at Hillsdale,” he said.