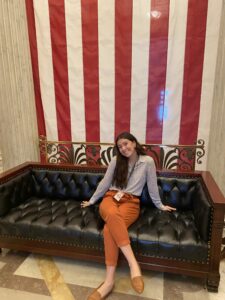 While most stu­dents jour­neyed back to Hillsdale during ori­en­tation week, I said goodbye to Hillsdale on a 7 a.m. flight. My plane rose with the sun, and I sat in the window seat on the small Delta plane, unable to sleep or dis­tract myself from thinking about the next three months.

As the captain announced that we were ready to land, I looked out my window and saw the city below me. The peaked tip of the Wash­ington mon­ument, the winding Potomac river, and the White House were all laid out on the ground underneath.

I became even more anxious and excited that I would be studying and working in Wash­ington, D.C., and I couldn’t wait to get started.

I’m not usually a big fan of cities; they leave me feeling tired and smelly, and remind me why I stay in sub­urbia. However, D.C. has proved to me that not all cities are the same.

I dis­covered a love for D.C. with the help of my roommate, junior Liz Brady. The day after we moved in, Brady con­vinced me to go exploring with her.

We walked a few blocks to Eastern Market, an outdoor square that houses a bustling farmers market with fruit stands, jewelry shops, and thrift stores under canopies lining the street. Most every­thing is hand­picked, handmade, or hand-selected by artisans and small business owners, making it the perfect stop for weekend mornings.

After grabbing some chocolate crois­sants and mapping out our adventure, Brady and I took the Metro down to the National Mall, the home of many of D.C.’s major mon­u­ments and museums.

After walking 11.7 miles, Brady and I visited the Wash­ington Mon­ument, the Jef­ferson Memorial, strolled through the Franklin Delano Roo­sevelt and Martin Luther King Jr. memo­rials, climbed up the Lincoln Memorial, walked past the White House, and got some incredible cheese­burgers at a local restaurant called Ollie’s Trolley.

Later that night we picked up dinner and caught the sunset on the lawn of the Capitol building, watching planes fly over the Wash­ington mon­ument and tourists snap photos of the his­toric buildings.

And that was just one Wednesday afternoon. Brady and I have wan­dered into countless museums and past innu­merable mon­u­ments since then because all of it is free — you never have to pay to expe­rience the history that sat­u­rates this city.

As the nation’s capital, D.C. is very cul­turally diverse which I think is most tan­gibly dis­played through the city’s food.

Walking around the city, it’s uncommon to see a Taco Bell or McDonalds. Instead, hole-in-the-wall restau­rants and take-out options line the streets — it’s almost all incredibly tasty.

Our first expe­rience with local D.C. food was during our ori­en­tation at the Kirby Center. Lunch was pro­vided, but instead of catered sand­wiches and salads, we had food from We the Pizza, a local gourmet pizza restaurant. Our options included white pie, buffalo chicken, and a margherita burrata pizza, not just cheese or pepperoni.

Along with spe­cialty pizzas, the city is known for brunch, which we all expe­ri­enced for the first time last weekend. A group of us went to Belga, a Belgian restaurant, where the menu was full of cre­ative twists on normal breakfast options.

I got the banana Nutella crepes, a pretty straight­forward option, but Brady ordered salmon eggs benedict, smothered in hol­landaise sauce. Green eggs, scrambled eggs with pesto, were another favorite from our outing.

I knew I didn’t want to work for a con­gressman or senator while on WHIP, and I was nervous about finding an internship that actually piqued my interest. But D.C. isn’t just a place for social climbers — there are oppor­tu­nities for every major and spe­cial­ization, it’s just a matter of knowing where to look.

I am working as a news intern for the Media Research Center, an orga­ni­zation based in the D.C. suburbs. My main respon­si­bility is to interview sen­ators and write stories about their responses, but I have also been cov­ering my fair share of national events and issues.

Working outside of D.C. and not having a car, I take the Metro to work some days. At first, this made me really nervous. The whole idea of being in a smelly, under­ground train with tons of people I didn’t know was not my idea of a relaxing morning, but Metro rides have quickly become my favorite part of my work day.

Once on the train, I didn’t need to worry about driving or being hyper aware of my sur­roundings; the Metro is the perfect time to pop airpods in, listen to my favorite podcast, and let my mind relax before the rest of my day.

Tuesday through Thursday, I walk to the Capitol in order to attend hearings and press events, and try to catch sen­ators in the hallway for a quick interview. In order to have access to the Capitol and the senate and con­gres­sional offices, I had to get a press pass on my first day.

The Capitol’s I.D. office works like its own DMV. I show my driver’s license, take a photo, and get my pass, which gives me almost unlimited access within the Capitol.

To catch sen­ators and interview them, I wait in the basement of the Capitol, right outside of the shuttles that run between the senate office buildings. As a reporter, I’m allowed to walk up to any senator and ask them a question and record their answer. If I’m still talking with them when it’s time for them to get on an ele­vator or a shuttle, I have to ask per­mission to join them.

My first day inter­viewing sen­ators, I flashed my press pass at the door, went through security, and attempted to find my way back down to the basement. I got lost about six dif­ferent times in the Capitol’s hallways and ended up asking a security guard for direc­tions. After finally finding my way down to the shuttles, I stood among about 25 other reporters from various news outlets, including The New York Times, CNN, and Politico.

We waited for the sen­ators to come down the stairs or exit the shuttle and tried to get a question in before anyone else could. It was very chaotic, and I was over­whelmed, but I knew there had to be some way for me to get to a senator before anyone else.

I moved to a spot away from the other reporters where I could see down a hallway that some sen­ators were coming down. I heard a pair of dress shoes clicking on the floor, looked up, and rec­og­nized this man and his beard. It was Sen. Ted Cruz (R‑Texas).

I walked up to him, waited for him to finish his con­ver­sation with his staffer, and asked him my question, hoping he would respond. Cruz began to answer my question and noticed all the other reporters gath­ering around him, so we started walking down a tunnel towards the senate office buildings.

He rambled on for about two minutes, in order to take up as much time as he could so that he wouldn’t have to answer many more ques­tions. I thanked him for his response, turned around, and walked back to my spot.

That day, I talked to Cruz, Sen. Eliz­abeth Warren (D‑Mass.), and a handful of others. After my inter­views, I go to an office in the Capitol that over­looks the lawn and I write up stories about the responses that get posted to the company’s website.

On top of working and exploring D.C., WHIP stu­dents can also take up to seven credits worth of classes. On Tuesdays and Thursdays, I take off my heels, throw on my tennis shoes, and rush to the Kirby Center after work.

Because the WHIP classes are not offered in Michigan, we get the oppor­tunity to take prac­tical courses that give us insight into our jobs. Just last week in David Azerrad’s Con­tem­porary American Political Thought class, we com­pared the eco­nomic and immi­gration policies of George W. Bush and Bill Clinton.

After spending most of the week writing stories about Afghanistan and problems at the Southern border, I under­stood how it actually affects Amer­icans’ day to day lives.

Whether it’s answering phones in a congresswoman’s office or writing news stories, our intern­ships provide real world expe­ri­ences and per­spective that we are able to take into a classroom in a way that stu­dents in rural Michigan simply can’t.

It’s so refreshing to walk back from class, talking with the other stu­dents and hearing how their work directly applies or relates to whatever we were just learning, whether it’s in our national security course or a pol­itics class.

As someone who knew nothing about pol­itics and hates cities, I didn’t think WHIP was an option for me. But it has turned out to be some of the most fruitful weeks of my life, and I’m just getting started.