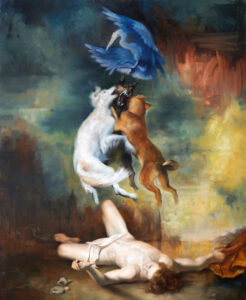 As she began to hang artist Maria Kreyn’s work in the Fine Arts Building, Assistant Pro­fessor of Art Roxanne Kaufman watched more stu­dents look in at the paintings than she’s ever seen while arranging past shows.

“The artwork feels very tra­di­tional, but when you get in with them and spend time with them, you can pick up on some of those more modern flairs,” Kaufman said. “They cap­tivate the stu­dents. Unless you go to a museum, you don’t really get to interact with motifs of this caliber.”

One painting shows a woman and her reflection gaze out at a passing viewer, hands folded gently across each other. She’s glowing, one side of her reflection a warm red and gold and the other a cool blue and green. Her eyes look almost as though she’s thinking about telling the visitor something.

Another image of hands, sprinkled with a layer of sparkling paint, catches the eye. Two hands, fingers turning blurred and black, reach out across an inky, dark purple back­ground. The title card reads “Almost II.”

Kreyn is a con­tem­porary, self-taught oil painter whose work has been shown in gal­leries throughout the United States, Europe, and China. “Kreyn tells a story of human intimacy and cer­emony,” her website, mariakreyn.com, reads.

Kaufman had been fol­lowing Kreyn’s work for years before reaching out  about bringing her art to campus. She worked with a shipping company from Farm­ington Hills, Michigan to bring the pieces from New York to Hillsdale.

“We try to find artists to portray artwork similar to what we teach here, very foun­da­tional, tra­di­tional, but also open to more modern ideas,” Kaufman said. “We bring in artists that inspire stu­dents to keep pushing them­selves and their skillset semester after semester so they can see the beauty and appre­ciate where they started, con­fident in where they’ve gone and where they’re going.”

“Some­times you question, ‘Well, if I learn these tech­niques, what can I do with it that is more than just painting a very tra­di­tional por­trait or still life?’” Suarez said. “I think she’ll show them, ‘Look, you can get very cre­ative and expressive.’ I think she’s really inter­ested in her self expression through tra­di­tional techniques.”

Kreyn’s work is based on realism and figures influ­enced by the old masters while still being modern, cre­ating a mix of the old and the contemporary.

“Her work is very mys­te­rious. There’s a surreal quality to it where there’s not a spe­cific story,” Suarez said. “You’re trying to figure out what exactly it is. It’s very poetic, what she’s doing.”

The department hopes to bring work to campus that everyone can enjoy and that ben­efits and inspires the stu­dents and community.

“The ver­satile quality of oil paint is really only appre­ciated in person,” Suraez said. “It’s going to have that quality of all kinds of dif­ferent paint that is thick and thin and flowy and chunky.”

The oppor­tunity for a student to sit in front of a painting for as long as they like is important, Suarez explained.

“Some artists are more capable than others at really painting their spirit and energy into their work,” Kaufman said. “She’s just got that nailed down. You can feel the energy coming off the can­vases, and maybe even some of her ideas that she wants you to think about start seeping into your thoughts. You can tell that she paints with a lot of passion.”

Fifth-year senior and art major Madelyn Schider said that Kreyn’s art was much more than the modern art she expected to see.

“I loved her style. She presents a story that I don’t really under­stand,” Schider said. “I would love to know more than just the title, maybe a blurb of what she’s trying to get at, because there’s some pieces in there that I’m like, ‘there’s def­i­nitely some­thing deeper about the painting’ and I would love to know what her view on that is.”

Schider said seeing the dif­ferent gal­leries on campus helps to see that an art career is possible.

“It’s hard to imagine the career of an artist. People always say you can’t really do it,” Schider said. “But having these pro­fes­sional artists show their work shows that you just have to put the time and the effort in and be patient with it, because of course you want to make a name for yourself. So just seeing that, it shows you can do this.”

A reception will be hosted this Friday from 5 p.m. to 7 p.m. at the Fine Arts building, open to all stu­dents to enjoy refresh­ments and observe the gallery. The work will be available for viewing in the gallery through October.