A fire erupted at a house near campus on the evening of Aug. 21.

The fire began on the back porch, according to Hillsdale Police and Fire Chief Scott Hephner, and spread to the interior of the house. The home is located at 27 Mead St., at the inter­section with Union Street.

“As soon as I left the building with the engine and turned the corner on Union, you could see the header of smoke. It was good and going,” said Hillsdale Fire Engineer Matt Halleck, who was first to arrive on the scene. “The entire back portion of the res­i­dence was on fire.”

Senior Essie Molloy is a student at the college. Molloy says the night of the fire, she was with her roommate when they heard an explosion. They ran out into the street to see what had happened.

“We heard a woman come out to the road and she was really upset, and she was exclaiming, ‘My whole life is in there!’ Then we ran out to see what it was, and that’s when we saw the smoke. We ran across the street to make sure she didn’t need any­thing. They were okay, and they’d already called 911.”

Pro­fessor Emeritus Sam Knecht, former pro­fessor of art, lives across the street from the house. Knecht said in an email that the night of the fire, one of his daughters announced the house across the street was in flames, at which point he went to see for himself.

“Fire trucks had arrived and were busy getting hoses hooked up to nearby hydrants. Quite a number of bystanders had assembled and all could see a fair amount of smoke rising up from behind the house, its north side,” Knecht said. “At one point we could see some flames above the roofline. However it did not appear that the whole house was aflame inside.”

Knecht said fire trucks came not only from Hillsdale, but also from nearby towns. He also said that numerous fire­fighters arrived at the scene in their per­sonal vehicles.

Hephner explained that this response was part of an aid agreement between the city of Jonesville and the city of Hillsdale.

Hephner said that this agreement is to ensure both cities have sub­stantial man­power to deal with a fire, should it get out of control.

“You’re talking a heat amount like that, and in our city res­i­dential areas, the houses are pretty close together. Worst case sce­nario, fire starts jumping houses,” Hephner said. “We just want to make sure we have the appro­priate amount of equipment and man­power at the scene.”

Knecht said he has spoken with the owner of the house, Carl Bur­roughs, many times throughout the years.

“The owner and prin­cipal occupant of the house, Carl, is someone with whom I have chatted off and on over the years of being neighbors,” Knecht said. “He is a decent fellow.”

According to Knecht, a couple days after the fire, he was speaking with Bur­roughs when a college student approached him.

“One of the college young ladies who resides in the new apartment house across the street from the burned house walked over and expressed con­do­lences to Carl from all the women in her res­i­dence and she handed him a sealed card. I don’t know if the women had passed the hat; Carl didn’t open the card at the time,” Knecht said. “But regardless it was a kind and gen­erous gesture on their part and speaks well of Hillsdale College stu­dents and their behavior in the community.”

Those stu­dents were Molloy and her room­mates. Molloy said that at the time of the fire, Bur­roughs was renting rooms out to several tenants, so he lost a source of income.

“We wrote a card for him, and put a little money in because we figured he wouldn’t be getting any income for a while.” She said, “He just seems like a really nice guy, so it’s the least we could do.” 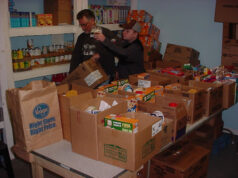 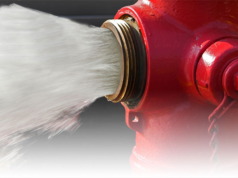