The “Antique Capital of Michigan” is a mere 15 minute drive from campus, in Allen, Michigan. Founded in 1830, the his­toric town has a pop­u­lation of about 200. Allen offers a motley col­lection of small shops and antique malls, which provide ample oppor­tu­nities for adventure and a fas­ci­nating day trip.

The Hog Creek Craft and Antique Mall spans over 23,000 square feet of antique booths to explore, offering a par­adise for the antique afi­cionado. A dif­ferent dealer rents each booth in the store, ensuring a broad selection of antiques. Booths contain vintage books, china, farm equipment, and a sur­prising number of duck statues. One unex­pected gem was a giant Civil-War era hay rake, still in func­tional con­dition. One could easily take mul­tiple days to thor­oughly inves­tigate what every booth had to offer.

The smaller stores in Allen were often staffed by their owners, which added a more per­son­alized, unique touch to the display and inventory. Country Cabin is a quaint antique store located near Hog Creek. The store­front boasts teacups, dishes, decanters, cook­books, fur­niture, and even a stunning cro­cheted lace collar. A cacophony of vintage elec­tronics reside in the back of the store.

Tom Everett and his wife, the owners of Country Cabin, have been in the antique business for 22 years and have owned this store in Allen for two years.

Everett said that his business hasn’t suf­fered from com­pe­tition with the large antique malls.

“Everybody shops every­where,” he said. “The big thing is to have some­thing that they want.”

Everett said he takes special interest in vintage elec­tronics, espe­cially radios, while his wife runs the rest of the shop. He received his first radio, a vintage model from the 1930s, when he was 13.

This radio kick-started Everett’s interest in antique elec­tronics. Today, he also repairs radios in addition to selling them.

After vis­iting Allen, Sophomore Rosemary Surdyke found a 1970s camera that she said “def­i­nitely belonged to a hippie.”

Senior Ryan Burbage returned to campus bearing the memory of a large felt rat statue wearing a dress. He termed this a “ROUS,” or a “Rodent of Unusual Size,” in ref­erence to the classic film “The Princess Bride.”

Sophomore Lucy Fer­nandes decided to buy a mug on this trip, but she also con­sidered pur­chasing a 1940s prayer book.

“I saw this beau­tiful leather­bound prayer book from World War II that had both Catholic and Protestant prayers,” she said. “I was struck by the comfort it would have given someone going into war. I wanted to get it in case I ever have a husband who goes off to war so I could give it to him dra­mat­i­cally, but I figured that wasn’t the best moti­vation, so I left it.” 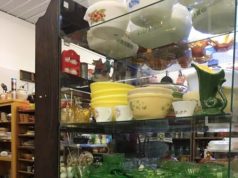 Allen antiques are still in style, despite national industry decline 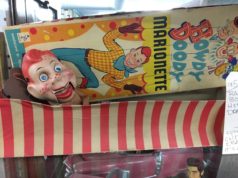