Even in the off­season, the Hillsdale College football team stayed busy, Alex Anschutz, Konnor Maloney, and Cole Johnson were all named 2020 – 21 Aca­demic All-Amer­icans by the College Sports Infor­mation Directors of America.

To earn Aca­demic All-American, the student-athlete must earn a cumu­lative 3.3 GPA or higher, as well as be chosen by CoSIDA based on aca­demic and ath­letic per­for­mance. Only 18 ath­letes in Hillsdale’s history have earned this honor since 1952. Anschutz, a senior team captain who plays the safety-line­backer hybrid position, said the achievement is a great honor.

“I wouldn’t say it was a per­sonal goal of mine but the culture of our team and our school is based around hard work and rejoicing in chal­lenge,” Anschutz said. “My per­sonal goal was to do my best both aca­d­e­m­i­cally and ath­let­i­cally to con­tribute to that culture.”

Part of Anschutz’s earning this award comes from hs activity off the field.

“Anschutz is a Bio­chem­istry major, and he earned the Pres­i­dent’s Scholar-Athlete Award at Hillsdale College for main­taining a GPA of 3.8 or higher in both 2020 and 2021, and pre­sented a semester-long research project in the spring of 2020 high­lighting key points of the mech­a­nisms involved in the human dopamine trans­porter in the brain,” Hillsdale College’s official press release said. “He’s cur­rently on track to graduate with high honors from Hillsdale College.”

Johnson, a red­shirt junior offensive lineman, also spoke on  Hillsdale’s culture both on the field and in the classroom.

“I believe Hillsdale College ath­letes are built for this award,” Johnson said. “We strive to com­plete the demanding aca­demic rigor up the hill and con­tinue to have ath­letic success down at the sports complex.”

Johnson’s involvement off the field comes from his financial man­agement major.

“Johnson also earned the Pres­i­dent’s Scholar-Athlete Award at Hillsdale College for 2021, and was named Out­standing Senior by the Hillsdale Financial Man­agement department this spring,” Hillsdale’s press release said. “He’s made the dean’s list all eight semesters at Hillsdale and earned a 4.0 GPA in each of the last two semesters. Johnson is on track to graduate with high honors from Hillsdale College.”

“They have estab­lished them­selves as leaders in the culture of the football program,” Otterbein said. “They also under­stand why they’re here, for an edu­cation, and they have a great work ethic.”

Prior to Maloney, Johnson, and Anschutz, only five Charger football players had ever earned this award. The Chargers became one of only five football pro­grams in Division II with mul­tiple first team hon­orees, in Maloney and Anschutz. The Chargers also were the only program with three Aca­demic All-Amer­icans on both teams, wth Johnson earning Aca­demic All-American Second Team.

“Knowing how few Chargers, espe­cially Charger football players, have earned this award exem­plifies just how hard my team­mates and I have worked over the years and brings about a great sense of pride in what we’ve accom­plished both on and off the field,” Maloney, a senior wide receiver, said.

Maloney is active in the Hillsdale Student-Athlete Advisory Com­mittee, which helps plan and set up charity efforts.

“[Maloney] has made the Dean’s list at Hillsdale College seven semesters in a row,” Hillsdale’s press release said. “A member of the Tri Beta Bio­logical Hon­orary, he also studied at an internship at the Michigan State Uni­versity Institute for Quan­ti­tative Health Sci­ences and Engi­neering, assisting in and earning credit for the research for a sci­en­tific paper pub­lished by the Royal Society of Chem­istry. An Exercise Science major, Maloney is on track to graduate with honors at Hillsdale College.”

All three players are returning for the fall season, and say there’s con­sid­erable energy for this upcoming season.

“It’s a great feeling to see our hard work in the classroom start to pay off, so I’m extremely excited to see how our efforts in the off season will sim­i­larly lead to great accom­plish­ments during the upcoming season,” Maloney said. “I could not be more proud of the way our team has handled adversity throughout the years and I can’t wait to see what’s in store for the 2021 season.”

Meet Garrit Aissen, the quarterback that saved the homecoming game 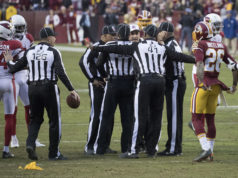 Bring back taunting in the NFL