“Our prac­tices this past week were more geared towards fun,” head coach Kyle Gross said. “This game is fun. We knew we were going into a huge weekend, but we wanted to make it more enjoyable than tense, and I think that played a role in how we exe­cuted this weekend.”

The Chargers traveled to Nashville, Ten­nessee to play the number one team in the con­ference on Sat­urday. Junior Elaine Townley put the Chargers on the board in the second inning by hitting a solo home run at her first at bat.

And rally they did. The Chargers got 11 more hits and seven more runs to end the first game early and shutout the Trojans.

Scoring four unan­swered points in the first three innings, the Chargers con­tinued to dom­inate over the Trojans.

Trevecca Nazarene fought back in the fourth and fifth inning to tie the game off of a three-run homer. However, senior Sam Catron hit a double for the Chargers in the top of the sixth to take back the momentum, and junior Renee Bielawa extended the lead to 6 – 4 with a single in the top of the seventh.

In the bottom of the seventh, freshman Erin Kapteyn was brought in to pitch relief for the Chargers. There was one out, runners on first and third, and the Chargers ahead 6 – 5.

“I looked over, asked Erin if she was ready, and brought her in,” Gross said. “I handed her the ball and I didn’t even say any­thing else to her.”

Walking the first batter, Trevecca Nazarene loaded the bases, needing only one run to tie the game.

“I don’t think I had ever been more nervous to throw three batters in my whole life,” Kapteyn said. “With the first hitter, I was warming up, shaking out my nerves, and getting com­fortable on the mound. After I walked her, Catron came up and gave me a little pep talk to calm me down.”

The next two batters hit a foul-out to first base and a fly-out to cen­ter­field, which clinched the Chargers sweep. Kapteyn achieved her first col­le­giate save and the Chargers walked away the top seed in G‑MAC.

The Chargers split Ken­tucky Wes­leyan College, winning the first game and losing the second of the series.

Coming out strong, the Chargers scored two points in the top of the first inning to set the tone against the Panthers.

“Going into Ken­tucky, we were ready to play,” Wei­dinger said. “We knew they were a good team, so we brought the energy and tried to come out as strong as we could.”

In the top of the fourth inning, the Chargers took advantage of errors by Ken­tucky Wes­leyan to score six more runs, making the contest 8 – 0. The Pan­thers attempted to rally and close the gap, but were unable to do so against the strong defense and pitching of Hillsdale’s team.

Starting her first con­ference game, Kapteyn was pitted against Ken­tucky Wesleyan’s ace pitcher in the second game of the series against the Panthers.

We tried our best, did great things, had great defense, and hit the ball,” Wei­dinger said. “But they just ended up winning.”

Looking towards the rest of the season, the Chargers will be playing Ursuline College on Sat­urday, April 24 to con­tinue their fight to become G‑MAC cham­pions once more. 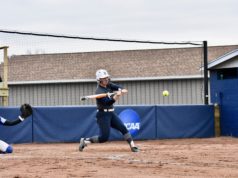 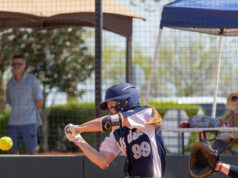