“Entry into a country by welfare cases, crim­inals, ter­rorists, enemy agents, or socialists and others sym­pa­thetic to tyran­nical systems of gov­ernment is never appro­priate,” said Charles Steele, chairman of eco­nomics, business, and accounting, asso­ciate pro­fessor of eco­nomics, and Herman A. and Suzanne S. Det­twiler chair in economics.

The southern border is pro­jected to see as many as two million illegal immi­grants by the end of 2021, the largest surge of migrants to the U.S. in 20 years, according to the Department of Homeland Security.

“Illegal aliens are coming across the border,” Steele said. “They are not vetted, and include people of doubtful ability to provide for them­selves, as well as members of criminal gangs such as MS-13. The crisis is also used by Hezbollah and other enemies to slip agents into America. Illegal entry includes vio­lating the property rights of Amer­icans who own property along the border, and often endan­gering them.”

According to a statement released by the Sec­retary of Homeland Security Ale­jandro May­orkas on Tuesday, the Biden administration’s pri­ority is to “secure borders.”

“The sit­u­ation we are cur­rently facing at the southwest border is a dif­ficult one. We are tackling it,” the statement read. “We are keeping our borders secure, enforcing our laws, and staying true to our values and principles.”

Since taking office in January, immi­gration reform has been at the top of the Biden administration’s list. But according to Thomas West, pro­fessor of pol­itics, Biden’s approach is con­trary to a healthy immi­gration policy.

“Trump tried to stop illegal immi­gration by building a fence, rapid depor­tation to Mexico for border crossers claiming asylum, and making deals with coun­tries to our south to incen­tivize the end of illegal immi­gration,” West said. “Biden is reversing these policies. The con­se­quence is a big increase in border crossings, many of them children not accom­panied by parents.”

Biden has promised his Demo­c­ratic base a more humane approach to illegal imma­gration, neglecting cit­izens in the process, Steele said.

“The events on the border are not a human­i­tarian crisis but a political one,” Cortes said. “What’s at stake is whether or not laws apply to cit­izens and for­eigners alike. Biden believes that the law should only apply to the former; Trump, to both.”

According to Steele, the Biden admin­is­tration is per­mitting unre­stricted travel for self-selected people from other countries.

“There are also people from Iran, Syria, Somalia, and other hostile coun­tries coming across the border. Groups such as Hezbollah can use illegal immi­gration as a vehicle to infil­trate the United States, and almost cer­tainly are doing this,” Steele said. “Mean­while, American cit­izens are told to quar­antine and threatened with the pos­si­bility of ‘vaccine passports.’”

According to West, Biden’s reversal of the pre­vious administration’s policy is concerning.

“Democracy means consent of the gov­erned,” West said. “But immi­gration policy is increas­ingly made up by the pres­ident, the bureau­cracy, and the courts. The solution? Restore and strengthen the Trump policies.”

Migrants from Mexico and the Northern Tri­angle have been entering the Southern border on car­avans con­taining hun­dreds, Fort Bliss in Texas has been estab­lished as an overflow site to accom­modate 500 unac­com­panied minors, immi­gration facil­ities are nearing, if not already sur­passing capacity, and the DHS and Immi­gration and Customs Enforcement have spent more than $86 million housing illegal immi­grants in hotel rooms near the border, according to ICE. Amidst all of this, the Biden admin­is­tration has out­lined its “vision of a multi-pronged approach toward man­aging migration throughout North and Central America that reflects the Nation’s highest values.”

“These surges are not spon­ta­neous. The surges are in part orga­nized by leftist groups and there’s some reason to think they often have support from pro­gressive policy circles in the U.S.,” Steele said. “During the Obama admin­is­tration, prepa­ra­tions for par­ticular surges were made well in advance with prepa­ra­tions. Judicial Watch used the Freedom of Infor­mation Act to access doc­u­ments showing that Health and Human Ser­vices had con­tracted with churches and other family service providers in advance of surges. And don’t forget that Biden and every other Democrat who par­tic­i­pated in the first primary debate openly endorsed free health care for every person who crossed the border.”

Just a third of Amer­icans approve of the way Biden has handled the immi­gration influx, with well over 50% claiming dis­ap­proval, according to a poll released by NPR/Marist on Tuesday. Biden can redeem himself by enforcing current law, Steele said.

“People often say ‘the system is broken’ and call for news laws, but the legal framework isn’t broken, it’s ignored,” Steele said. “It’s ignored because various people with power benefit from the chaos polit­i­cally and economically.” 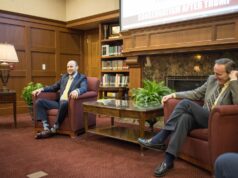 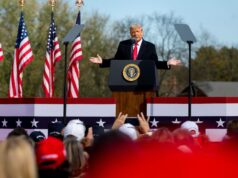