Every great library starts with a single book. For Senior Assistant to the Provost Mark Maier, it was only a matter of time before one signed copy of poet Paul Mariani’s book grew into a 3,000 book col­lection.

When Maier studied English at Hillsdale, he fre­quented the vis­iting writer series run by Pro­fessor of English John Somerville. There, he met Mariani. Ever since, he has been hooked on the hunt for col­lec­table books.

“I really enjoyed inter­acting with Mariani,” Maier said. “I started seeking out oppor­tu­nities to get books signed by various people and I have never stopped since then.”

“They’re the easiest to get,” Maier said. “If you’re col­lecting 18th century or earlier, you run into issues of not only cost but also con­dition. Also, part of the fun of col­lecting more con­tem­porary stuff is antic­i­pating which authors are going to be around for a long time.”

Maier tends to haunt book­store aisles as well as attend author signings, but he is also part of a niche club run out of Square Books in Oxford, Mississippi.

“It is really nerdy,” Maier said with a laugh. “It’s a signed first edition club. Each month, they send you a book. Typ­i­cally, the books they choose are the sort of things I would seek out anyway.”

Through shopping around and the help of the club at Square Books, Maier’s col­lection has steadily grown. Some might even say it has grown too steadily.

“My wife would tell you I kind of have a problem,” Maier said.

His goal has always been to have 3,000 books in his col­lection, fol­lowing the example of the eccentric 18th century writer Samuel Pepys. Maier has kept this number in mind as a sort of soft goal, but as his wife has noticed, he has sur­passed even Pepys’ numbers.

“I’ve run into the place where I’m very much out of space, so I’m trying to cull the col­lection to make room for more,” Maier said.

Though some books will sadly have to leave his shelves, some are trea­sures that will not be parted with. Maier’s favorite author is Walker Percy, a 20th century southern gothic novelist.

“I have all of his books signed first edi­tions except for his first two, “The Moviegoer” and “The Last Gen­tleman,” both of which are pretty expensive. I don’t know that it’s likely that I’ll ever get them.”

He also dreams to one day own a signed Flannery O’Connor novel. One of his very favorites in his col­lection is not par­tic­u­larly mar­ketable but is very special to him.

“There is an author I really like named JF Powers. A few years back, when he died, his library was sold,” Maier said. “He had a first edition copy of an Evelyn Waugh novel, “Vile Bodies.” My wife somehow found the col­lection and bought me JF Powers’ copy of “Vile Bodies.” I love both authors and it is a nice way of con­necting the two. It has a place of pride in my collection.”

Maier hopes his col­lection will be passed on as well. He told a story about an expe­rience he had while working as a librarian.

“Ten or so years ago, I had somebody approach me to say their father had passed away and they needed to give away all his books to the library col­lection,” Maier said. “I realized at the time that I’ve been amassing this huge col­lection myself and this student had no interest in the books at all. It would break my heart if my children didn’t value these things the way I do.”

Maier has a sneaky plan to make them care, however. He often gets books signed in the name of one of his sons so they have to keep at least a portion of his collection. 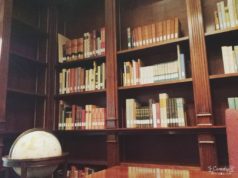