The downfall of edu­cation did not begin with the iPhone or the tele­vision; it began with the invention of writing.

While that statement may be a bit dra­matic, it’s true that for the majority of Western civ­i­lization, mem­o­rizing poetry, among other forms of rhetoric, was a critical com­ponent of a young scholar’s edu­cation. Today, such a practice is nowhere to be seen in the majority of American class­rooms. Except, that is, in the class­rooms of Hillsdale professors.

Beier first dis­covered the value of mem­o­rizing poetry at the Uni­versity of Kansas, in which he mem­o­rized poetry through a unique method.

“Somebody would speak it, and without the medi­ation of the text, you would have to begin responding in chorus, and even­tually, over time, let it become your own,” Beier said.

Asso­ciate Pro­fessor of English Dwight Lindley expe­ri­enced a similar love for poetry in his young adulthood. He said although his father would recite mem­o­rized poetry to him as a child, he had no interest in mem­o­rizing poetry himself until he read a Socratic dia­logue by Plato in college.

According to both Lindley and Beier, having access to infor­mation via the internet or a large library is prac­tical, but not as ful­filling as having that infor­mation memorized.

“If poems provide insight into the world and are delightful music, then to mem­orize is to carry those insights within yourself, in a way very dis­tinct from having a book on your shelf,” Beier said. “There’s some­thing about it that gives delight as well as instruction.”

Since dis­cov­ering the value of mem­o­rizing poetry, Lindley has com­mitted to memory several poems, as well as Bible verses and Bib­lical poetry.

“I made a res­o­lution that I wanted to build up a body of more beau­tiful things in me, not just whatever rock songs I hap­pened to listen to a lot and therefore memorized.”

Sophomore Anna Swartz, one of Lindley’s stu­dents, started mem­o­rizing poetry in the 8th grade at her clas­sical school.

“Having the poems in your mind is helpful because you don’t have to look them up,” Swartz said. “They’re already there. When you’re trying to make a comment in class, it’s cool to be able to ref­erence these poems because they’ve already been in your mind.”

Though she often mem­o­rizes poetry to fulfill class require­ments, she finds beauty in the art itself and believes it makes her a better writer.

“I’m a firm believer that there aren’t any original ideas,” Swartz said. “All ideas that you have are influ­enced by the teachers you’ve had and the things that you’ve read. It’s cool to be able to engage with writers who have gone before you and take those bits of knowledge and be able to imme­di­ately apply them to your own thoughts.”

According to Lindley, much of con­tem­porary lit­er­ature suffers due to the lack of poetry mem­o­rization in modern education.

“The lan­guage in a lot of books and speeches of our day is utterly impov­er­ished because those men and women have not been well edu­cated,” Lindley said. “They have not filled their souls with beau­tiful things. Whereas, Abraham Lincoln did. His sen­tences had such a pleasing rhythm to them because he had ingested the poetry of the King James Bible and Shakespeare.”

Above all, Lindley said, stu­dents should mem­orize poetry because it can help them beyond their time at Hillsdale.

“You want to live a beau­tiful life. You want to build up your soul so that you can carry it forth into whatever life you live after this, which will be some­thing you won’t really predict.” 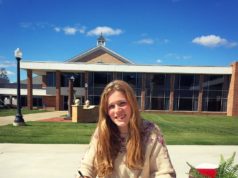