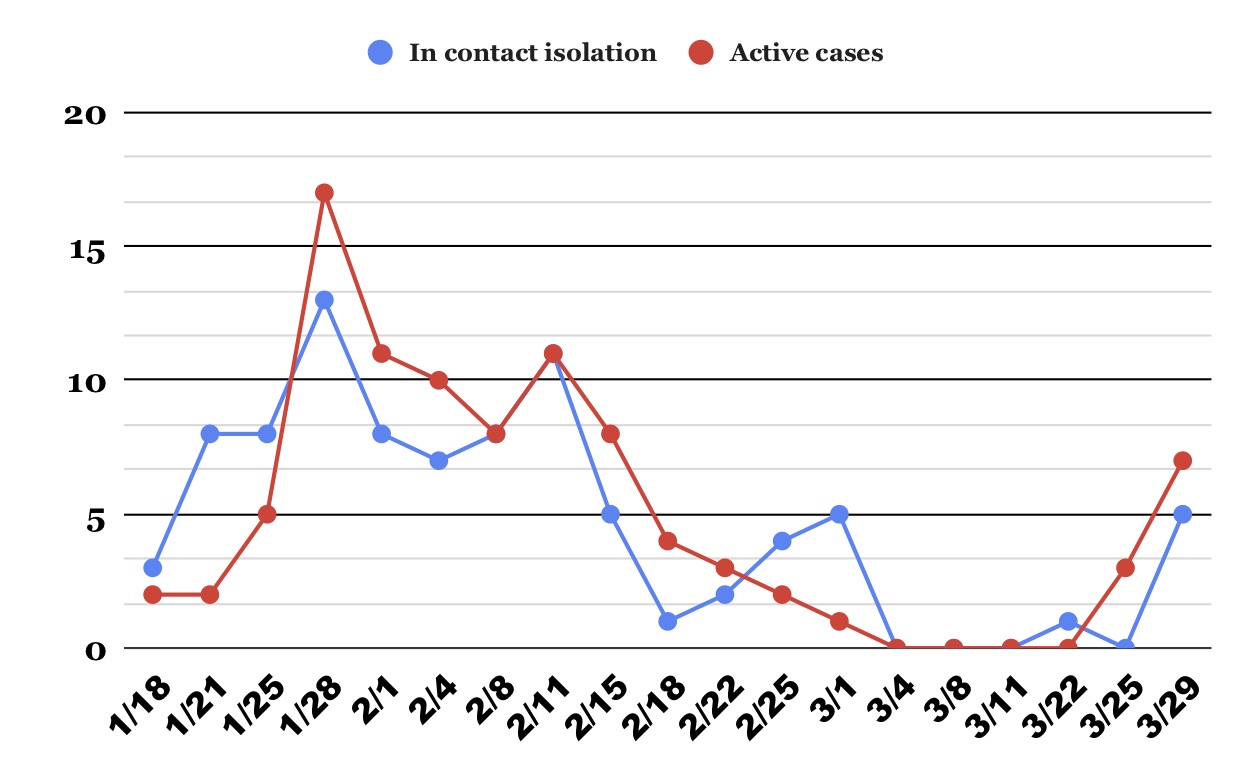 Hillsdale College stu­dents now can receive COVID-19 vac­cines from the Branch-Hillsdale-St. Joseph Com­munity Health Agency, which is offering shots to anyone ages 16 and up.

“It was a super fast process. We saw the email yes­terday, we got our appoint­ments yes­terday, and then were able to get it this morning,” said Michaela Peine, a senior who got the Moderna vaccine at the first clinic, held at Hillsdale High School on March 31.

Those who went to the first clinic can receive their second dose on April 28. A second clinic will take place on April 2 at the Dearth Com­munity Center in the Branch County Fair­grounds in Cold­water, with the second shot admin­is­tered on April 30.

The clinic at Hillsdale High School had things “down to a science” on Wednesday, according to Peine.

“We didn’t have to wait in line,” Peine said. “They took us right when we got there and we just had to fill out some paperwork. We saw a bunch of other college stu­dents there. And we were in and out in less than 15 minutes.”

Since March 1, COVID-19 cases in Michigan have spiked almost 400%, according to data released by the state of Michigan. In an interview with Crain’s Detroit on Monday, Gov. Gretchen Whitmer sug­gested vaccine admin­is­trators expand their eli­gi­bility to include the 16 and up age group so that the state can achieve herd immunity as quickly as pos­sible. With the expanded vaccine eli­gi­bility, Whitmer said providers should still pri­or­itize those who are at risk.

After three straight weeks of zero reported cases of COVID-19 on campus, the Student Activ­ities Office newsletter reported three active cases on March 25 and seven on March 29. Five stu­dents are in quar­antine due to contact with an indi­vidual who has tested pos­itive for COVID-19, as of March 29.

The Hillsdale College football team, which has played only one game so far this season, had to cancel its March 28 game against Lake Erie Uni­versity at the last minute. The team is still scheduled to play Tiffin Uni­versity Saturday.

“Looking at other col­leges around the country and their numbers, our having zero cases for so long seems to be an anomaly and a bit of good luck,” said Diane Philipp, vice pres­ident for student affairs and dean of women. “We are not sur­prised to see a few cases on campus again, though we are watching each sit­u­ation care­fully and asking our com­munity to take con­tinued care to protect those who may be more vulnerable.”

The BHSJ Com­munity Health Agency receives around 2,400 doses of COVID-19 vaccine every week, which it dis­tributes to the tri-county area, according to its website. It began accepting all res­i­dents aged 16 and up on March 23.

On March 26, stu­dents were notified via email by Brock Lutz, the college’s director of health ser­vices, that they were eli­gible to receive the vaccine. The email also included a survey to determine how many stu­dents would like to get vac­ci­nated if the oppor­tunity were available.

Four days later, stu­dents received another email from Lutz directing them to make indi­vidual appoint­ments with the health agency through the agency’s website. These appoint­ments are granted on a first-come first-serve basis, the email said, and are the same appoint­ments available to the general public.

Stu­dents who wish to receive a COVID-19 vac­ci­nation can go to the Branch-Hillsdale-St. Joe Health Department website and sign up with their campus address, date of birth, and pre­ferred time. Stu­dents who do not have means of trans­portation to the clinic can seek assis­tance from the deans.

In January, Hillsdale Hos­pital admin­is­tered 900 doses of the Pfizer vaccine via a clinic in the Searle Center to healthcare workers and others eli­gible, including college faculty and staff members who were in the Michigan Department of Health and Human Ser­vices’s Tier 1A and 1B cat­e­gories. Stu­dents were inel­i­gible to receive the vaccine at that time. The BHSJ Com­munity Health Agency and Hillsdale Hos­pital have hosted a few other clinics since then, including one last Thursday, according to Rebecca Burns, the health officer at BHSJ Com­munity Health Agency.

The agency has not yet worked with Hillsdale College’s health center to bring a student-focused vac­ci­nation clinic to campus, instead directing stu­dents to reg­ister at its other sites. The agency does not cur­rently have plans to host a clinic on Hillsdale’s campus, Burns said.

“The state is receiving more Johnson & Johnson vaccine here this next week,” Burns said, referring to the newer, single-dose vaccine option. “As we get more of that vaccine, that would be a perfect vac­ci­nation for college stu­dents who may be headed home for the summer. So hope­fully we’ll be able to do some vaccine clinics there at the college.”

The Jonas Brothers’ new single will get stuck in your head