If there’s one issue Chris­tians should be single-issue voting on, it’s life, according to Scott Klusendorf, a pro-life activist and speaker.

On Tuesday night, Hillsdale College for Life hosted Klusendorf, pres­ident of the Life Training Institute, an orga­ni­zation of pro-life advo­cates, to teach stu­dents how to make better argu­ments for the pro-life cause.

In the 2020 election, Klusendorf said, Chris­tians were led to believe they couldn’t make abortion a single-issue motive. They also believed they could vote for a pro-choice can­didate in spite of their support for pro-life.

Klusendorf explained his strategy in four basic points: assertion of the nature of moral rea­soning, clarity and con­sis­tency in the pro-life view, appro­pri­ately responding to oppo­sition, and re-engaging in the political sphere.

Klusendorf began by describing the moral rea­soning of intrinsic value in humanity.

“There is a dif­ference between stealing a pencil and ripping a child’s face off. And if you don’t see that dif­ference, some­thing’s wrong with you,” he said. “Yet we had a lot of people who thought we could justify putting in power a gov­ernment that would help us avoid con­tingent evils, but we’re per­fectly fine with that gov­ernment affirming and pro­moting intrinsic ones.”

Klusendorf explained the pro-life position by con­trasting two views of human life, what he called the  “sub­stance” and the “endowment” views. The first argues that though physical bodies change over time, humans have “an under­lying nature or essence that grounds your identity through time and change,” Klusendorf said. This means life has intrinsic value in all stages, he said.

The rival view is the “per­for­mance” view.

“It says that you are not iden­tical to the embryo you once were, or the newborn you once were, that the real you has nothing to do with your body,” he explained. “It is strictly your mental self. That’s it.”

The problem with the per­for­mance view, Klusendorf said, is its pro­motion of body-self dualism. When self-awareness is the source of human value, it divides a man’s soul and mind from his body.

“If we can kill new­borns and fetuses because neither is self aware — if self awareness grounds our identity and our value, and you have more of it than me — what follows?” he said. “You have more fun­da­mental rights than I do, and human equality is out the window.”

Klusendorf said a common objection to these pro-life argu­ments is to point out other areas that pro-life pro­po­nents seem­ingly don’t focus on as much, such as adoption or caring for the poor, but they should refuse to play defense.

“Suppose we’re that awful that we will never adopt a child ever care for the poor. All we care about is children before they’re born,” Klusendorf said. “Would our argu­ments still be valid and sound, even if we didn’t act like we say? Yes, it would be. You have not refuted the pro-life argument by an ad hominem attack on the people you think ought to be doing more.”

Those who object on the basis of rape are two kinds of debators: the inquirer who acts out of good faith and empathy and the cru­sader who aims to make the apol­ogist look bad. Klusendorf empha­sized that victims of rape have suf­fered a great injustice and trauma and deserve empathy; however, one’s pain does not justify killing another.

“How do you think a civil society should treat innocent human beings that remind us of a painful moment? Is it OK to inten­tionally kill them so we can feel better?” Klusendorf said.

Pro-lifers need to push their activism to the political sphere but don’t, Klusendorf said, often because they wrongly believe that they must change hearts in order to change politics.

“The purpose of law is not to change every­one’s heart. In fact, doesn’t the exis­tence of law pre­suppose that some peo­ple’s hearts won’t be changed?” he said. “That’s why we need to con­strain them through law.”

Pro-life activist Ade­laide Holmes ’20, a mentor to apol­o­gists on campus, said Klusendorf has been her per­sonal mentor in the pro-life movement but has not been able to speak at Hillsdale until now.

“Scott just has a really good knowledge of the phi­losophy of some of the best pro-choice argu­ments out there and then why the pro life argument is stronger than that,” Holmes said. “Hillsdale stu­dents really latch on to the aca­demic philo­sophical side of the pro life movement, so he’s just a really great guy to bring in to kind of talk about that and really cater to what Hillsdale stu­dents really want to talk about.” 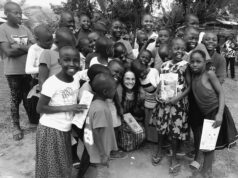 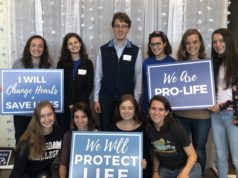