Muddy Waters Stadium erupted into emphatic chants as Dob Kinz chugged a gallon of chocolate milk in the middle of the field. “Dob! Dob! Dob!” rang out across the stadium fol­lowing an ener­getic Mock Rock per­for­mance given by the now-noto­rious Team Dob.

Last week, Team Dob stole the hearts of spec­tators during Spirit Week events through their ener­getic par­tic­i­pation and eccentric style.

On Monday, the team unveiled a banner that detailed a cyber­netic Pres­ident Larry Arnn pro­tecting Central Hall from hordes of zombies while armed with an energy blaster and downing a jug of chocolate milk.

“Team Dob’s banner didn’t ini­tially put their team on the radar. As the week went on, their par­tic­i­pation in Home­coming slowly gained momentum,” said Home­coming par­tic­ipant and freshman John Ritchy.

After the photo com­pe­tition, the team gained campus-wide recog­nition. Their photo of an apoc­a­lyptic militia trudging through the wilderness quickly inspired a cult fol­lowing on social media. Instagram accounts such as  @hillsdale_eagle and @hillsdalememes all shared content about the team’s cul­tural impact on campus.

When Sat­urday rolled around, the team took Mock Rock by storm. The per­for­mance used a mix of popular internet songs, sto­ry­telling tech­niques, props, and various chore­og­raphy styles to secure a third-place victory.

“Team Dob’s enter­taining sto­ryline along with a strong synergy between its team­mates ulti­mately earned its place as a crowd favorite,” said Assistant Dean Aaron “Chief” Rogers, a judge at Mock Rock. “The ‘Not-Good Robot’ was a clever use of a costume to improve the overall per­for­mance. In general, I think Team Dob accom­plished their mission in bringing so many people together under a charis­matic label.”

Dob Kinz, a senior studying biology, is the name behind the team. He is fre­quently seen around campus with the Ultimate Frisbee Club or playing vol­leyball at Hayden when the weather is clear. As a self-iden­tified “eccentric,” Dob once ran across campus during a polar vortex in short sleeves and shorts, for which he received an email from Dr. Arnn. Yeah, he was that guy. He also wore a dress to Garden Party and “jorts” to the 2020 SAB Welcome party.

“It’s been a long-running joke in my friend group that I should be Home­coming King, however, that has never been a real option,” Kinz said. “Orig­i­nally, I thought it would be funny if I started a team with just myself and com­peted in Spirit Week. However, as time went on, my friends started to join in, and before I knew it, we were a full-fledged team.”

Senior Team Dob member Logan Baer noted that “Dob has a certain gravity to him. He is the type of guy who doesn’t take himself extremely seri­ously but still is thoughtful of others and under­stands others’ per­cep­tions. His eccen­tricity brings people together. Because of his attention to other peoples’ per­cep­tions, we were able to do so well. We orga­nized our Mock Rock to play to the audience of Hillsdale com­pared to other teams with more sex­ually provocative dance moves.”

Kinz noted how the team’s Mock Rock per­for­mance was a group effort. It com­bined the dif­ferent skill sets of the indi­viduals on the team to mix the track, provide chore­og­raphy, and design costumes.

On the topic of the team’s song choice, Kinz said, “Our first song, ‘Sick of Being Honest,’ con­nected back to fake horror youtube video memes. Later down the line, when we decided to include ‘Megalo­vania,’ we knew we had to run with the boss battle idea. The sto­ryline for the rest of the routine just formed nat­u­rally,” Kinz said.

“My biggest advice to future teams is to take a step back and not take things as seri­ously; we are all enjoying Home­coming so let’s make the most of it,” Kinz said.

Team Dob’s success caused a stir on campus. For the first time, a non-affil­iated group of stu­dents placed above greek houses, dor­mi­tories, and the Off-Campus Coalition at Mock Rock.

As Nied­feldt Head RA Colton Duncan wrote in an email, “Spirit Week was no longer just an expression of inter-dorm rivalry. For the first time, stu­dents could give their loyalty to a per­son­ality rather than to a com­munity,” Duncan said. “I do not know whether the Team Dob phe­nomenon will con­tinue in future Home­comings. But if it does, we should know that Home­coming will never be the same.” 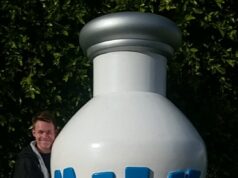 It’s normal to drink three cups of milk a day