In a movement back toward nor­malcy and com­munity, Bon Appetit Man­agement Company has rein­tro­duced china dishes and regular sil­verware to the dining hall, according to Bon Appetit Manager David Apthorpe.

“This is a step that we can take to get back to a more normal style of service,” Apthorpe said.

The decision was made in con­sid­er­ation to sus­tain­ability issues and a desire for com­munity, he said. Dis­posable utensils and dish­wares did not reflect Bon Appetit’s com­mitment to either goal, according to Apthorpe.

“However good the food that we make is, it never tastes as good on paper,” Apthorpe said.

The process of rein­tro­ducing chi­naware was meant to be gradual in order to get the san­i­tation processes under control.

Getting the dish machine in order and “making sure that we could run things and that the wheels wouldn’t fall off” fac­tored into the decision to make the tran­sition after spring break, Apthorpe said. This would also help stu­dents tran­sition from the expec­tation of taking their food to go. He added that he believes it will be a chal­lenge to change this expec­tation because the use of dis­pos­ables was convenient.

“So what we want to get back to is the original model or how the hub of the model of your family dining room food service is sup­posed to get,” Apthorpe said.

To accom­modate for stu­dents who are not yet com­fortable eating in crowded spaces, the dining hall still will package meals to-go. All stu­dents have to do is order through the Transact Mobile Order app.

“All the plates go through 185 degree dis­tri­b­ution with san­i­tizer included so we feel that the dishes and sil­verware are san­i­tized,” Apthorpe said. “We’re trying to partner with the vision and the mission of the college, and that is to return to normalcy.”

He added that the timeline to return to other aspects of the original dining hall expe­rience, such as self-serving salad bars and the veggie bar, is very short. Though “things can change rapidly,” Apthorpe said they plan to rein­troduce those aspects before the semester is over.

“We are very much looking forward to con­tinuing to be aligned with the college phi­losophy, to try to return to as much as we can,” Suero said. “So the famil­iar­ities like with the red bowls, things of that nature, does promote more of the com­munity feel and more of that familiarity.”

Senior Rachel Stanford said she is glad the china is back in the dining hall. Though she appre­ciated the con­ve­nience of the dis­posable dishes, she said she thinks this pro­motes more of the com­munity the college aspires to.

“I think if you’re a freshman, then you could call it like a taste of what expe­rience you’re sup­posed to have when you first came here,” Stanford said. “You’re finally getting what the com­munity is actually sup­posed to be like.”

Shorten the dining hall lines: Get a job 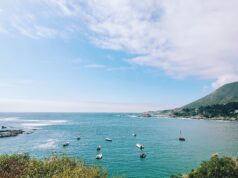 Christmas in Chile: how Quarantine restrictions couldn’t stop this family