Both Hillsdale College and the nation have seen a big drop in cases of COVID-19 in recent weeks.

“COVID-19 is in retreat in America,” writes Derek Thompson of The Atlantic. “New daily cases have plunged, and hos­pi­tal­iza­tions are down almost 50 percent in the past month.”

Hillsdale County’s sit­u­ation has seen a similar improvement. According to Centers for Disease Control and Pre­vention data, since Feb. 1, daily new cases have not risen above 18. Along with that, the county has not had more than one COVID-19-related death on a single day since Jan. 14. The total number of COVID-related deaths sits at 78, with only two coming in the last two weeks

Rachel Lott, Hillsdale Hospital’s director of mar­keting and devel­opment, said hos­pi­tal­iza­tions have accord­ingly dropped sig­nif­i­cantly since their peak in mid-December.

“We can’t say exactly what has caused the decrease in new cases, but we are cer­tainly encouraged to see declining numbers. The decrease in new cases is likely due to a com­bi­nation of factors, which include indi­viduals fol­lowing rec­om­mended public health pre­cau­tions, and getting vac­ci­nated,” Lott said. “We are for­tunate to see fewer and fewer COVID-19 deaths in our com­munity, and are opti­mistic that this trend will continue.”

Campus has expe­ri­enced a bounceback as well. There has not been an active pos­itive case on campus since Mar. 8 and only one student is in quar­antine due to contact with an indi­vidual who has tested pos­itive for coro­n­avirus. The College’s Director of Health Ser­vices, Brock Lutz, said this decrease is likely due to several factors.

“We had quite a spike in late fall and likely reached some level of herd immunity through those cases and those staff who have been vac­ci­nated. Hillsdale Hos­pital and the local health department have col­lab­o­rated to vac­cinate thou­sands of people in Hillsdale County,” Lutz said. “Numbers have been steadily decreasing across the state since January. The ath­letic department is also admin­is­tering hun­dreds of tests per week to the student ath­letes and iso­lating pos­itive cases, which have been very few.”

Asso­ciate Pro­fessor of Biology Silas Johnson said he thinks these numbers can be deceiving.

“Just to be clear here, the college hasn’t had any pos­itive cases con­firmed by diag­nostic testing. This is dif­ferent than not having any pos­itive cases at all,” Johnson said. “It is likely that some small number of stu­dents, faculty, staff, or others asso­ciated with the college have had SARS-CoV‑2 infec­tions over the past month, but they were not con­firmed by diag­nostic testing or reported to college health services.”

Regardless of how many active cases there are, the drop in cases both on campus and nationally is sig­nif­icant. But what accounts for this dra­matic decrease?

The intro­duction of the COVID-19 vaccine, lockdown pro­ce­dures, and partial immunity likely all play a role, Thompson argues. It could also be that the coro­n­avirus was always going to decline during this time of year.

“Mask wearing, social dis­tancing, and other virus-mit­i­gating habits vary among states and coun­tries. But COVID-19 is in retreat across North America and Europe. Since Jan. 1, daily cases are down 70 percent in the United Kingdom, 50 percent in Canada, and 30 percent in Por­tugal,” Thompson wrote in The Atlantic. “This raises the pos­si­bility that SARS-CoV‑2, the virus that causes COVID-19, is sea­sonal. Last year, a meta-study of coro­n­aviruses such as SARS-CoV‑2 found that they typ­i­cally peak in the Northern Hemi­sphere during the winter, with the most common peak months being January and February.”

Johnson, on the other hand, said it is likely due in large part to so many Amer­icans being either vac­ci­nated or having already had the virus.

As the college looks to stay COVID-free, reducing restric­tions sur­rounding the virus con­tinues to look more real­istic, according to administrators.

“We will con­tinue to col­lab­orate with our local health department and Hillsdale Hos­pital for guidance in deter­mining testing, iso­lation, and quar­antine mea­sures,” said Dean of Men Aaron Petersen. “We look forward to easing restric­tions as we are able.” 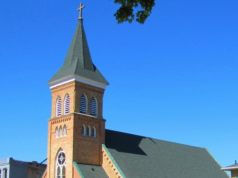 Dear Catholics at Hillsdale: Be a light to home parishes