One time my suit­emate popped his head into the room and men­tioned that he wanted to read Danish philosopher Soren Kierkegaard.

“I’ve heard tons of people talk about him,” he said. “But nobody reads him.”

Within the hour, we had looked up some basic bio­graphical facts on Kierkegaard and ordered matching copies of “Either/Or.”

Now, I had doubts about Kierkegaard. Almost everyone I know who reads him turns into some quasi-cult member. What’s all the hype?

Regardless, when Thanks­giving and Christmas break came along, I really dug into the text. I high­lighted every line that I found inter­esting and wrote a number in the margins next to it, putting a cor­re­sponding number and comment in a google doc.

I am only halfway done with the book, but let me say this: I am now a cult member.

Kierk­a­gaard ought to be included in Hillsdale’s Intro­duction to Phi­losophy (PHL 105) courses. Here are my two reasons why.

First, Hillsdale stu­dents are in touch with their hearts. Despite the con­stant emphasis on reason and faith, much of the vigor of the com­munity comes from its strong emo­tional quality. There is nothing these people are not pas­sionate about, and Kierkegaard deals with emo­tions in a way other philoso­phers do not. He treats human nature on an intimate level, such that some of his foremost asser­tions are about love, desire, sorrow, anxiety, and depression. This is a fairly unique field amongst philoso­phers: many treat logos, some eros, but almost none make an attempt at thumos. Thus, there is a great potential for affinity between his writings and our stu­dents.

Second, Kierkegaard can rescue phi­losophy from its most common dif­fi­culty here at Hillsdale College. I mean, let’s face it: how many times have you talked to an English or phi­losophy major who says he is “depressed about phi­losophy” or a Christian who has an almost axiomatic dis­trust for phi­losophy? This comes from two main factors. First, that a common theme of the books we read in our core English courses is the Mil­tonic Prin­ciple of being “lowly wise.” This can easily be mis­con­strued into Hume’s sug­gestion of playing backgammon and aban­doning phi­losophy since “reason entirely sub­verts itself.” Some­times, stu­dents con­clude that they might not need phi­losophy or reason to act in accor­dance with their nature. But the opposite is true: res­o­nance with one’s nature requires under­standing — in short, the liberal arts — phi­losophy, English, the­ology, and geometry.

The mod­ernists and post­mod­ernists we read in PHL 105 have a sin­gular incom­pat­i­bility with Christian faith. A close reading of Locke, Descartes, Hume, Kant, or Niet­zsche can cast someone into serious doubt about the use of phi­losophy, or reason, or even about their per­sonal faith itself. As Hillsdale College Pres­ident Larry Arnn likes to point out, edu­cation is dan­gerous. The PHL 105 course often reads like a roller­coaster — it’s all downhill after the initial climb of Plato’s “Republic.”

Kierkegaard can save us. He grew up Lutheran, entered sem­inary, and was betrothed to a woman he loved dearly, but gave that life up to devote himself fully to phi­losophy. He con­stantly ref­er­ences the Bible in his writings — but not in the cryptic way of Neitzsche and many others. His writings are lit­tered with ideas from, and com­par­isons to, the Greeks, and his outlook par­tic­i­pates in many central Christian beliefs. For example, he writes that “it is through sin that one first catches sight of sal­vation,” and “the reli­gious is the expression of a paternal love.”

There are, of course, many philoso­phers who are highly influ­ential and deserve a spot in any survey course. Some stu­dents spec­ulate that there should be two semesters of PHL 105 in order to treat thinkers like Hegel, Hei­degger, and even con­tem­po­ra­neous writers like Mac­Intyre. These may be argued at a later date, but Kierkegaard remains sin­gular amongst the philoso­phers in his holistic treatment of man. The Western Canon is vast, but Kierkegaard holds a unique position to speak to the hopes, fears, minds, and hearts of under­grad­uates. He deserves a spot in our Intro­duction to Phi­losophy course. 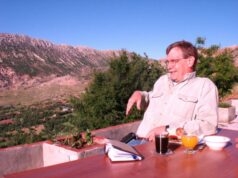