Anne Schmitt’s fingers move deftly over the stacked key­boards. Though her motions are sure, the notes that emanate from the organ’s pipes make her key­strokes sound clumsy and garbled. She releases a key, but the sound con­tinues until she adjusts the stops, cutting off the flow of air to the pipes entirely.

It might be that the recent bitter cold has seeped into the instrument’s 92-year-old bones, but more likely it needs to be com­pletely restored — no small under­taking for this par­ticular organ, which has remained nearly unchanged since it was installed in St. Anthony’s Catholic Church in 1929.

“Our church is a his­toric building in a his­toric town. This is a his­toric organ that’s a big part of the church, so it’s important to pre­serve that,” said Schmitt, who is the music director for St. Anthony’s. “To restore it in its sim­plicity and its beauty, I believe would be the most rev­erent and respectful thing to do.

St. Anthony’s pur­chased the organ from the Casavant Freres Company in Quebec, which fur­nished churches and concert halls across the world with their inno­v­ative organs. This one was bought “off the rack,” according to Schmitt, and it doesn’t conform to the choir loft the way a custom organ would. It’s essen­tially a box with pipes lining the front and oak pan­eling on the sides.

Its simple exterior con­ceals a complex interior. The appa­ratus that sends the signal from the key­board to the pipes to make a sound is called a “tubular pneu­matic” system. In this design, lead tubes connect the console to the valves to produce sound instead of electric signals or mechanical levers. It was a design popular at the beginning of the 20th century. Tubular pneu­matics last  about 100 years between major restora­tions — double the lifespan of the best electric organs.

“When you actually see it, it just looks like a rat’s nest of a tube for every key,” said John Ourensma, the director of music at Hillsdale’s First United Methodist. He pre­vi­ously worked for an organ making company, and does free­lance organ tuning and repair. He helped clean and restore some of the pipes in St. Anthony’s organ.

The problem is that the interface between the keys, air-pressure system, and pipes involves 90-year-old leather parts that are starting to fail and are neg­a­tively affected by changes in tem­per­ature and humidity. As a result, the pipes keep pro­ducing sound after the organist has stopped pressing them.

Junior Clare Kearns plays the organ during most Sunday morning masses at St. Anthony’s, and has expe­ri­enced the problem.

“It’s def­i­nitely gotten a lot worse since it got really cold and dry, but mainly the keys have just been sticking a lot,” she said. “I’ll be playing and just some of the notes will keep sounding way after I released them, and so it just sounds like I’m playing all the notes at once.”

If the problem doesn’t abate with the return of warmer weather, then it’s likely the entire tube system will have to be replaced in a months-long restoration process. Schmitt is working with J.L. Weiler, Inc., an organ repair company in Chicago to perform the restoration.

“They call it his­tor­i­cally informed restoration,” Schmitt said. “It’s not like they nec­es­sarily only use mate­rials that they had in 1929, but they do their best to restore it to the way it was back then.”

According to Ourensma, the organ is in nearly pristine con­dition, which makes it unique among organs from its era.

“We think it is special because nothing’s been done to it, and it basi­cally looks and sounds exactly like it did in 1929,” Ourensma said. “A lot of times churches get impa­tient with organs, and organists want new fads and new trends. And so they add on, or they throw it away and build some­thing new, or really alter it in some way. But St. Anthony’s is a quiet, con­ser­v­ative, easy-going parish. Call it luck or prov­i­dence, but they never messed with it. So it’s really a simple little work­horse of an instrument.”

Hillsdale’s com­munity has fancier organs, but St. Anthony’s uniqueness comes from its sim­plicity. It isn’t meant to be its own show or to perform complex musical works.

“It was designed basi­cally to accompany chant in the Latin service, but with a little bit of work on the part of the organist, it can make enough sounds that you can play some other kinds of music for more of the singing that the whole con­gre­gation does now in the Catholic Church,” Ourensma said.

In Schmitt’s view, the organ is worth restoring to its original con­dition despite the time and cost it will demand. For one, doing so will ensure the use of organ music in St. Anthony’s for another hundred years. It will ulti­mately be more eco­nomical, as a new electric organ would still cost over half what the ren­o­vation would, and only last for half the time.

Though St. Anthony’s also has a piano, which can be used when the organ is acting up, it doesn’t invoke the same rev­erence as the organ. The sound of the organ echoes across 1,200 years of Christian history, having first been intro­duced to the Western rite when Emperor Charle­magne requested one for his chapel in the year 812. For cen­turies, it was the only instrument allowed to accompany the mass aside from the human voice.

The Second Vatican Council wrote in the doc­ument “Sacro­sanctum Con­cilium” in 1963 that the organ should “be held in high esteem, for it is the tra­di­tional musical instrument which adds a won­derful splendor to the Church’s cer­e­monies and pow­er­fully lifts up man’s mind to God and to higher things.”

Schmitt said that the organ is nec­essary to maintain this sense of tra­dition in litur­gical music.

“I’ve seen a real revival in people’s love of tra­di­tional music,” she said.  “I see it in this parish in the way they sing the Latin mass parts and the hymns so well. The reason we’re here, the reason we are actually created on this earth, is to worship God. So it’s very important to me that our worship is always rev­erent and beau­tiful. And so for me it’s important to maintain the tra­dition of the organ.”

In addition to con­tinuing the musical tra­dition of the Western Church, the organ con­nects the past and future parish­ioners of St. Anthony’s in par­ticular.

“The use of the organ in our day has been quite dimin­ished,” Ourensma said. “We now have praise bands and other instru­ments and that’s all fine, but then there are churches like St. Anthony’s that have basi­cally been using an organ since the day the church opened.”

There isn’t yet a set plan for how and when the restoration will be carried out, but it needs to happen sooner rather than later. Schmitt is con­fident that the com­munity will see that what needs to happen, will happen

“I’m con­fident that with the gen­erosity of our parish, we will be able to his­tor­i­cally restore the organ. If we do that, it’ll be good for another 100 years. We’ll all be gone, but what a gift to leave to this com­munity.” 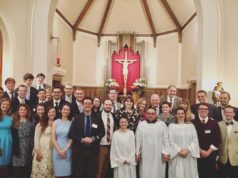 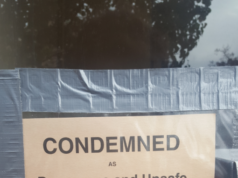