Emma McCormick ’19 is “exactly the sort of person” to buy a sailboat, move to Florida, and live in a marina, according to Clara Johsens ’19. And that’s exactly what she did.

McCormick, who majored in eco­nomics at Hillsdale and works as a financial analyst for General Motors in Detroit, grew restless working remotely during the pan­demic. Having worked from home since March 2020, McCormick, founder of the Outdoor Adven­tures Club at Hillsdale, began to plan her next adventure.

“She was vis­iting me in D.C. in October, and it was so funny because the entire time she was super focused on this idea of buying a sailboat and moving to Florida,” Johsens said. “It was def­i­nitely one of those things where we all thought it would be cool, but that was it. And then she actually did it. So then of course we all had to go visit her.”

In Sep­tember, GM told its employees they would work remotely until July 2021. For McCormick, that was the push she needed to pull the trigger.

“I had had plans during the summer, and I had plans in the fall — I was vis­iting a bunch of dif­ferent friends. But I had zero plans for 2021,” McCormick recounted.

After Christmas, she can­celed her lease, put the majority of her belongings in storage, and moved down to St. Petersburg, Florida to start her life in a new home — a 25-foot Freedom sailboat with a single main sail. Last weekend, Johsens, along with Lauren Sheard ’19, Catherine Howard ’19, and Kaitlin Makuski ’19, came from all over the country to stay with McCormick in her sailboat for a four-day weekend.

“I was like, ‘I don’t want to spend the winter in cold, gray Detroit,’” McCormick said. “‘I want to try some­thing different.’”

“Try some­thing dif­ferent” is a bit of a motto for McCormick. She ran an Iron Man after her freshman and sophomore years. Last summer, she ran 100 miles across the Idaho Pan­handle. Johsens recounted how she and McCormick became friends when, one week­night in the Mossey Library as a sophomore, Johsens found cheap tickets to Paris, and McCormick said “yes” to a European adventure without hesitation.

“All of us were unsur­prised when she decided to move to a sailboat, because she’s run out of insane, physical feats to accom­plish,” Johsens said with a laugh.

Twenty-five feet isn’t a lot of space for five girls, espe­cially on a sailboat that only sleeps four. Catherine Howard, only 5’1’ tall, said she couldn’t quite stand fully upright in the hold. The girls orig­i­nally planned to sleep in a hotel, but Howard said since she and Sheard are “pretty tiny,” they ended up sharing a bench-bed so all five of them could all spend the night together.

“Obvi­ously, it’s a pretty simple, minimal lifestyle, but she seems so happy just being there,” Howard said.

McCormick wasn’t in the sailing club at Hillsdale, and she didn’t grow up sailing either. In fact, the first time she sailed was after grad­u­ation, when she moved to Detroit and joined a racing crew.

“It’s small for five people to stay on, but it’s a pretty large boat,” Howard said. “When we went out sailing, she was directing us, guiding us, teaching us how to put up the sail. It was really crazy, but she loved it and was really excited to share all of the sailing knowledge that she’d gained.”

Her move to Florida def­i­nitely made waves, McCormick said.

“Most people I talked to back in Michigan thought I was pretty crazy,” McCormick said. “And my parents did too. Here, though, almost everyone knows or knows of at least one person who lives on a boat. It’s a lot more common down here.”

A native of Coeur d’Alene, Idaho, McCormick started from square one when she docked her sailboat alongside about 600 slips in the marina in Tampa Bay. But being the only person she knows for miles around isn’t uncharted ter­ritory for her.

McCormick esti­mated 150 people in the marina live aboard their boats full time, from couples to fam­ilies with kids to retired folks.

“It’s been fun to get to meet them,” McCormick said. “We go sailing together, and we’ll help each other with projects on our boats. And it’s inter­esting; I really enjoy hearing peoples’ stories of why they’re doing it. What brought them here? They’re from all over.”

For more than a few of them, what brought them down was the global turn to remote work and school for the fore­seeable future.

Johsens recounted con­ver­sa­tions she had one night over mar­garitas, chips, and gua­camole, with some of McCormick’s friends at the marina. One family, a Southwest pilot with his wife and kids, has become pretty good friends with McCormick, Johsens said.

“They just started home­schooling, bought a Cata­maran, and are living at the marina,” Johsens said. “There were def­i­nitely a lot more people living there than I expected.”

When hur­ricane season comes in August, and it’s dan­gerous to be on the water, many marina res­i­dents will simply dock some­where else — like one family Johsens talked to, who planned to relocate to the Bahamas.

During business hours McCormick is still working remotely from the slip, though on weekends she’ll take trips out on the bay — whether that’s for a short ride or for a six-hour, 12-mile Odyssey just depends on the day.

“I don’t want to lose my job, of course,” McCormick said. “I have to be back by July, unless they change their mind. So at this point, I’m kind of thinking the end of May is when I’ll head back to Michigan.” 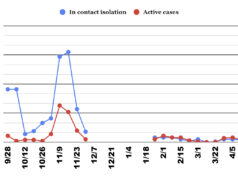 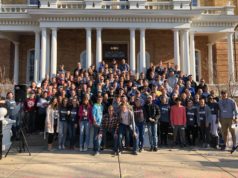 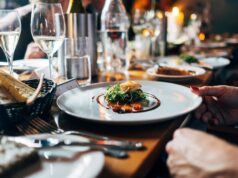