“We were very grateful for the oppor­tunity to play this weekend,” junior team captain and out­fielder Reagan Gen­siejewski said. “But this weekend doesn’t show what we can do as a team, and I think the rest of the season is going to be more reflective who Hillsdale softball actually is.”

Kicking off the com­pe­tition with a win against West Florida, the Chargers demon­strated the strength of their defense and pitching staff. Senior pitcher Dana Wei­dinger fin­ished the game with no walks and won the 33rd game of her career, which moves her into a tie for sixth place in Hillsdale history for career pitching wins.

Wei­dinger explained the excitement she felt this weekend after having to wait 388 days since the Charger’s last game.

“It’s almost like you’re a kid that is trying to steal cookies off the top of the fridge,” Wei­dinger said. “As soon as you get that cookie jar, you’re just through the roof about it. Getting to step foot on that mound and be sur­rounded by my team­mates was exhilarating.”

Despite the excitement of finally getting to play, the Chargers lost the last three of their games. Head coach Kyle Gross said they struggled with defense and allowed runs early in the game.

In the midst of these chal­lenging games, Gross said he reminded his players to focus on their game, and their game alone.

“I told them to take the score­board out of it. We need to have our bats, do the things we need to do to improve, and remain pos­itive,” Gross said. “We took the good things away and learned from the mis­takes we made, and now we get to play again this weekend. And that was our message this past weekend: we get to play.”

The Chargers are trav­eling to Rosemont, Illinois to compete in the Dome Tour­nament, where they will be playing five games between Friday Feb. 19 and Sunday Feb. 21.

Wei­dinger said that the team is main­taining an encour­aging, pos­itive attitude going into this weekend and cannot wait to see more opponents.

“We’re looking forward and having that pos­itive mindset going into these games, no matter who is on the other side of that field,” Wei­dinger said. “It’s about knowing that we can do this and play these five games against tough oppo­nents because we’re one of the best teams out there.”

With the results of this past weekend behind them, Gen­siejewski explained that those losses are now moti­vation for the Chargers going into this weekend.

“We were frus­trated, and I think that’s a good thing because if you want to be a suc­cessful college team, you have to think about your sport 24/7,” Gen­siejewski said. “So that’s in the back of our minds, now we’re going to go show everyone what we can actually do.”

Bats on fire as Hillsdale beats OVU 3 – 1 in series 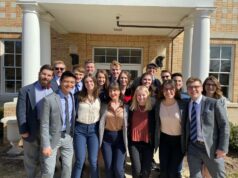