“When Rich was here he worked half the time at the arboretum and the other part he was here in the ath­letic department,” Pat Hornak, director of events and game day coor­di­nator, said. “He worked game days as our game day man­agement.”

Alvarez was involved in many Charger sports from track and football to bas­ketball and vol­leyball. His respon­si­bil­ities included setting up the facil­ities for games, man­aging the workers during events, and greeting vis­iting teams and offi­cials.

“He had a big heart,” Hornak said. “He loved the kids here and loved working with them and the ones who worked for him loved it.”

Alvarez was the equipment manager during Hornak’s time as a Charger football player. After an injury, Hornak became a student coach during his senior year and worked alongside Alvarez before he grad­uated in 2006. The two con­tinued to work together for years after.

“After I grad­uated Rich and I would sit in the truck and drive to games. I’d always drive there and on the way home he’d always drive and I’d cut the film on the way,” Hornak said. “There were always jokes and stories and music and laughing. We’d bring back old movies he’d seen and we’d say the same lines over and over again. It was always fun. We were best friends. I was the best man in his wedding.”

Alvarez was born on July 16, 1960, in Abilene, Texas, and moved to Hillsdale in 1965. The Hillsdale College Grounds Department hired Alvarez in June 1996, where he worked as a manager of the Slayton Arboretum as well as the college’s ath­letics equipment manager and game day coor­di­nator.

Hornak said toward the end of Alvarez’ tenure with the college, the wear and tear of the job began to weigh on his body.

“Toward the end, he wasn’t able to do all the things he used to do,” Hornak said. “I think for him that was tough on him because he wanted to do a lot of that but he just knew it was time. He had been going through a lot of surg­eries the last few years to try to fix what needed to be fixed.”

He retired from the college a year ago and moved to New­burgh, Indiana. Alvarez died in the Owensboro Health Regional Hos­pital in Ken­tucky and is sur­vived by his wife, JoAnn who worked in the finance department of Bon Appétit before they both retired. Alvarez also had two stepsons, two grand­children, three brothers, four sisters, and many nieces and nephews.

“When they were able to retire, they had a grandbaby and were able to move down south and be close to them,” Hornak said. “He could fish, be a grandpa, and he just had a smile on his face when I saw him in October when he came up.”

Hornak said he could tell Alvarez was happy to have the time to enjoy himself.

“It was nice for him when he didn’t have to worry about beating up on his body,” Hornak said. “I know he missed being at the games and doing that stuff, but he can enjoy life in a dif­ferent part now and still look forward to when the team would be playing close to them.”

Beyond the college, Alvarez was very involved in ath­letics at both Hillsdale and Jonesville high schools. At Hillsdale High School, he helped coach football, wrestling, and softball. He was also the head softball coach at Jonesville and led the team to win two dis­trict cham­pi­onships in 2009 and 2011.

Jonesville ath­letic director Kathy Bond­steel said she was happy to bring Alvarez on as a coach in 2006.

“He was a coach and a really good friend of my family. It was awesome to have him come on the coaching staff,” Bond­steel said. “He was a won­derful guy. He wanted to make sure the girls loved the game of softball and that they learned about life as well.”

After Alvarez’s passing, Bond­steel said she saw many com­ments and notes on social media from past players who spoke of their mem­ories and appre­ci­ation for their late coach.

“He loved what he did and loved working with the kids,” Bond­steel said. “His ded­i­cation to Jonesville was just amazing. He was there working on the field or if kids wanted to stay after and get any extra help, he would do that. It was won­derful to see all of the com­ments and inter­esting for me to read that he was still in touch with some of them. He wanted to make sure college was going well and that they were happy.”

Peter Beck, Alvarez’s high school wrestling coach, took over the Hillsdale High School varsity wrestling program in 1978, which was also Alvarez’s senior year. After Alvarez grad­uated, Beck helped him move on to Grand Rapids Com­munity College, and when he returned, he wel­comed Alvarez back as a vol­unteer assistant coach.

“It was fun working with Richard because I coached him and his brother. He was the kind of guy who just reeked of com­mitment. He had a passion and would bust through walls to get things done,” Beck said. “He has a lot of skills and used them as much as he could. I was always close to him as a coach and a mentor.”

With the current COVID-19 restric­tions, there is still no scheduled memorial service. Hornak said the Alvarez family is planning a memorial service for the spring at St. Anthony’s church in Hillsdale, where he was heavily involved before moving.

“He would go to church every Sunday,” Hornak said. “He was even a sponsor for several stu­dents.” 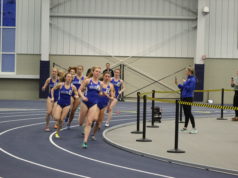 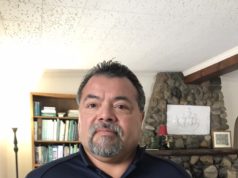 Unsung heroes: With athletic events, Alvarez is ‘behind it all’