The changes, which came at the beginning of the fall semester, were planned more than a year ago. The booth seats were reuphol­stered with a burnt orange pleather after the idea was brought over the summer by D&N Uphol­stery from Bliss­field, Michigan. The uphol­stered chairs were also replaced with wooden ones.

“The college has been really good to work with to update and maintain their facil­ities,” General Manager of Bon Appetit David Apthorpe said.

Bon Appetit has projects com­pleted every summer. Some of them aren’t visible to the student body, such as instal­lation of new kitchen equipment.

While the booths were out of use, Bon Appetit sup­ple­mented the seating with more chairs.

“The updates didn’t really incon­ve­nience me at all,” sophomore Megan May­ernick said. “It was funny to watch stu­dents tem­porarily use chairs instead of the booths in between replace­ments, but it really didn’t impact me.”

More than 400 chairs were rickety and in need of repair, and only about 100 were usable before ren­o­va­tions. The new chairs appear to be sturdier and easier to clean.

“We worked with the college to pick out the color of the booths,” Apthorpe said. “The thought behind it was to find colors that would go with the center fire­place.”

“I have always enjoyed sitting in A.J.’s Cafe or dining hall booths with enough room for friends, spending time with them or studying,” sophomore Samuel Schaefer said. “When the school changed the booths, it just seemed like they were making an investment in one of my favorite spots on campus.” 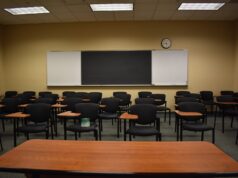 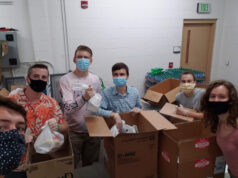 Feeding the hungry: Students help Bon Appetit deliver food to those in quarantine