The Hillsdale College shotgun team earned first place in its first in-person shoot of the fall at the John A. Halter Shooting Sports Center on Oct. 17.

The team hosted Michigan State Uni­versity and Olivet College at the home com­pe­tition, which was the first super sporting shooting com­pe­tition of the season. The chargers led the com­pe­tition with 917/1000 clays, while MSU and Olivet trailed by more than 160 targets.

Coming back from a semester of quar­antine, the team had not prac­ticed super sporting clays as much as the other shooting disciplines.

Super sporting clays on the other hand requires more planning and fore­thought in the posi­tioning of the gun for sub­se­quent shots and targets, according to Korhonen.

Com­peting with COVID-19 restric­tions has altered how most com­pe­ti­tions will look for the semester, resulting in many team com­pe­tition can­ce­la­tions. In an effort to offer some col­le­giate com­pe­ti­tions, the Asso­ci­ation of College Unions Inter­na­tional and the Scholastic Clay Target Program has begun hosting virtual shoots across the country regardless of size and location.

Prior to the Charger open shoot, the Charger shotgun team com­peted in several virtual shoots against other schools throughout the nation. Virtual shoots take place during the week at each team’s home club and coaches submit scores online to whichever league is hosting a shoot.

“In some ways shooting vir­tually helps because we’re not as anxious as we would be at an in-person com­pe­tition,” Moore said. “But in other respects that nervous energy gives you an edge, so you have to find a medium between being on the top of your game and remaining calm.”

Head coach Jordan Hintz ’18 said that the freshmen have inte­grated incredibly well to the team, and despite the strange year, he is happy with how they are doing.

“We just shot really well as a group,” Hintz said of the team’s first in-person shoot. “It wasn’t a super easy course and most of our ath­letes really rose up to the chal­lenge. If we can keep that momentum going we will be in good shape.”

The team will have its next in-person com­pe­tition at Island Lake in Brighton, Michigan, for a National Sporting Clays Asso­ci­ation shoot. 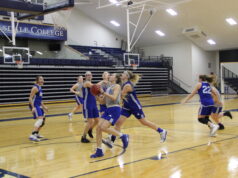 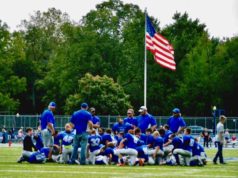