Caf­feine is many stu­dents’ drug of choice, and Hillsdale stu­dents are no exception.

There are a variety of dif­ferent shops in the area to satisfy the coffee lovers in town, but one stands out in that it’s both a coffee shop and a bar. Rough Draft — with its cozy yet modern, indus­trial yet chic atmos­phere — has been serving the com­munity since 2017. But it’s the baristas who pour love into their jobs that make Rough Draft so special. Many of those baristas are Hillsdale stu­dents and alumni.

Fifth-year senior Danae Sollie started working at Rough Draft in January. She said she chose to work there because of its relaxed atmos­phere.

“I was home fall semester of last year with a trau­matic brain injury and I started working a coffee shop job as a relaxing break from high intensity brain work in school,” Sollie said. “When I came back in January I knew I needed a job, but I wanted one that didn’t add more stress. Rough Draft is very relaxing, and I always feel better after I work.”

Along with its pleasant atmos­phere, Sollie said she appre­ciates being able to meet people from outside of campus social circles.

“I love working in a place that allows me to interact with college stu­dents and com­munity members — it’s a perfect inter­section between those two,” Sollie said. “Just being in the com­munity and not just the ‘college bubble’ is great.”

In addition to stu­dents like Sollie, several alumni chose to work at Rough Draft after grad­u­ation. Patrick Lucas, who grad­uated Hillsdale College in 2018 and teaches art at the Will Car­leton Academy, has worked at Rough Draft for over a year.

“It is a breath of fresh air in Hillsdale and I feel like the vibe and the quality is so unchar­ac­ter­istic of Hillsdale,” Lucas said. “Hillsdale’s really cool but I’m from sub­urbia, so I feel like I walk in here and I’m tele­ported out of Hillsdale. The vibe is good and I wanted to learn about coffee and cock­tails.”

Lucas also expressed his appre­ci­ation for the con­nection Rough Draft gives him to the college.

“As an alumnus I feel con­nected to the college still just from serving cus­tomers and talking to them,” Lucas said. “If I overhear a cus­tomer saying they’re working on a paper I’m probably going to ask what class and what prompt. I’ve met stu­dents through Rough Draft just by serving them.”

According to Lucas, another fun part of working at a coffee shop is being able to make and enjoy every drink, and exper­iment with new ones. He said one cus­tomer who grad­uated with him in 2018 used to work at Star­bucks, and her husband wanted some­thing similar to a Star­bucks sig­nature drink. Lucas could easily replicate it.

Alumna Anna Summers, Rough Draft’s res­ident baker, shares a similar cre­ative spirit. She grad­uated in 2018 and was friends with Lucas during college. After grad­u­ation she left Hillsdale for a year.

“I worked in HR at an auto­motive company doing sales and logistics and it sucked the life out of my soul,” Summers said. “I came back to Hillsdale to find some­thing more mean­ingful and with the people and the kind of com­munity it is, I knew I was going to be able to find some­thing here. Rough Draft had an opening for a baker and I’ve always liked baking, it’s one of my favorite things to do.”

Summers makes a variety of baked goods for the shop, including rasp­berry shortcake cookies, pumpkin bread, and sweet and savory scones. Cus­tomers who walk in while she is working are likely to smell whiffs of the freshly baked goods, which are made on-site.

While Summers grad­uated with an eco­nomics degree, she is no stranger to the culinary arts.

“My aunt and uncle are both chefs and my grand­parents are old German and Dutch ladies who just love to bake and cook, so I learned a lot from them just watching,” Summers said. “But in terms of learning to bake, that’s some­thing I just learned on my own.”

Summers said several of the goods served at Rough Draft come from inspi­ration from her family.

“My favorite thing to watch people eat because they love it so much is rum cake,” Summers said. “I haven’t made it too many times here but my family has this recipe that makes an appearance at every Christmas party and I try to incor­porate it here and it’s always a hit.”

Junior Sophia Berryhill, a barista at Rough Draft, said talking to Summers has been a high­light of working there.

“She is also in school right now to become a midwife, and we had a cool expe­rience talking about that because that’s what I also want for my career,” Berryhill said. “It was unex­pected that another employee there wanted to go into that same field, and we talked about a lot of the com­mu­ni­cation skills that are applicable to both careers.”

Berryhill said she also appre­ciates the quality of the coffee itself.

“I almost always make myself a bourbon vanilla latte; it’s just our classic base drink but it’s so good,” Berryhill said. “We work really hard to make sure that our beans and espresso quality are the highest they can be and it shows in our drinks.”

But ulti­mately, Berryhill said it is the com­munity that makes her love her job so much.

“It’s nice being in a place removed from campus but where I still feel com­fortable having a con­ver­sation with people who walk in. There are a lot of stu­dents but also alumni and people who live in the sur­rounding area,” Berryhill said. “I love the ambience, and it being a peaceful place to work and be.” 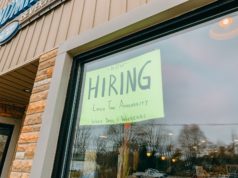 Hiring in Hillsdale amid the COVID-19 pandemic 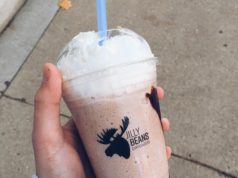 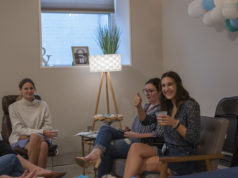