“Courage is the key to success in life,” Maj. Gen. Patrick Brady said. “It’s the great and proven equalizer in life. We are all born equal in terms of courage. Each of us can have all the courage we want. We can’t use it up.”

Brady, one of 69 living Medal of Honor recip­ients, shared his under­standing of courage and patri­otism with members of the Hillsdale College com­munity in honor of Veteran’s Day on Nov. 11.

Veteran’s Day, Brady said, is all about cel­e­brating America’s nobility.

“Unlike other nobil­ities, their titles were not inherited,” Brady said of medal recip­ients. “They were earned through blood, sweat, and tears, and that is the hal­lowed trinity that secures our freedom. Without vet­erans, without our nobility, we would not be free.”

Brady rescued more than 5,000 American and Viet­namese sol­diers while serving in the Republic of Vietnam com­manding a UH-1H ambu­lance heli­copter. The day he earned his Medal of Honor, he vol­un­teered to rescue more than 100 wounded men from a site in enemy-held ter­ritory which was reported to be heavily defended and blan­keted by fog.

While in Vietnam, Brady said he realized that the foun­dation for true courage is faith.

“Courage is reaching a breaking point but not breaking,” Brady said. “When fear knocks on your door, send faith to answer.”

Asso­ciate Pro­fessor of Man­agement Peter Jen­nings served in the U.S. Marine Corps as a mil­itary officer and intro­duced Brady to the audience. Jen­nings said Brady cap­tures the essence of Hillsdale’s defense of liberty.

“Defending liberty is a tra­dition of this college,” Jen­nings said. “It defines who we are and what we stand for as a college com­munity. That tra­dition was born in the service and sac­rifice of the stu­dents of the Civil War generation.”

“I would define sac­rifice as love in action,” Brady said. “You take that great emotion, love, and you do some­thing with it.”

Senior Sam Catron said she was struck by Brady’s description of sacrifice.

“The key to hap­piness in life is sac­rifice, so you’re not just living for yourself; you’re living for others and putting your self-interests aside for the greater good,” Catron said.

In reflecting on America’s nobility, Brady said America remains excep­tional because of its courage, com­passion, and competitiveness.

“We’re free because of America’s courage, mostly our vet­erans’,” Brady said. “No country is more gen­erous or has a com­pas­sionate care for others when there are hur­ri­canes, tsunamis, you name it.

We are very com­pas­sionate for the care of others in the world and in America. The free exercise of com­pe­tition granted by our Con­sti­tution is the basis for our prosperity.”

Brady added that courage, sac­rifice, and patri­otism are the foun­dation for America’s sov­er­eignty, freedom, and future. America will lose its excep­tional char­acter when its cit­izens cease to embody these qual­ities, he said.

Brady noted the highest form of patri­otism is pro­viding youth with an edu­cation that pre­pares them to practice unselfish sacrifice.

“We all are part of teams in fam­ilies, schools, nations –– when some­thing happens to one of us, it happens to all of us,” Brady said. “That’s true of our nation and why we need to grow patriots.”

According to Brady, a patriot is someone who is willing to prove they love their country through the support and defense of it.

society cannot survive without patriots,” Brady said. “Another source of our declining pride in America may be the dismal state of our basic knowledge of who we are as a nation. I realize here at this great college, you focus on that.”

“It takes courage to act on the duty that you are called to and to fight for what is right for our country and our society,” Catron said.

Brady said America’s youth must be edu­cated and inspired by the wonders of America for the country to survive.

“Young people must love their country if they are to support and defend it,” Brady said. “They must believe we are loveable people and excep­tional people if this is to work.”

Brady said American freedom is like a treasure chest filled with the sac­ri­fices of vet­erans, heroes, and patriots. This chest of freedom is exhaustible and must con­tin­u­ously be replen­ished with sacrifices.

“That’s my message to you from our vet­erans, those who sac­ri­ficed their youth, so that liberty might grow old over many years, countless bat­tle­fields, and over the bodies of mil­lions of dead,” Brady said. 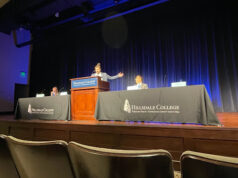 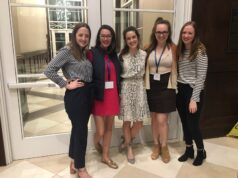 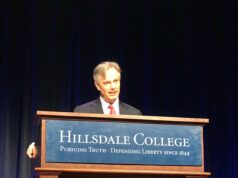