“I’m in the middle of a 45 year con­ver­sation with these men and women I’m sur­rounded by,” Bruce Spring­steen says in “Letter to You,” the doc­u­mentary created in con­junction with the album of the same name. Springsteen’s newest album reflects on the past with the honest wisdom of a man who has loved and lost, and found love again — this time for keeps. Spring­steen replaces the cynical future painted in his popular 1984 album “Born in the USA” with a touching and vul­nerable grat­itude in “Letter to You.”

Springsteen’s new record-breaking album, released Oct. 23, begins in The Boss’ char­ac­ter­istic fashion, with a melan­choly cry to a faithless lover with a des­perate chorus, sung in a near-whisper —“One minute you’re here, next minute you’re gone.” But unlike the hope­lessness of the love songs on “Born in the USA” — “I’m on Fire,” “I’m Goin’ Down,” or “Cover Me”—his cries aren’t hopeless. He’s “so alone,” but he’s “coming home.” The last lines of the opening song show a man com­pletely vul­nerable, at the end of himself, singing, “On the muddy banks, I lay my body down, this body down.”

But even as “One Minute You’re Here,” stands alone against the rest of the album, it sets the tone for the rest of “Letter to You.” It’s as if Spring­steen is describing who he once was, only to remind us of how things have really turned out. A ray of hope appears in the album’s title track— “Letter to You”. With a tri­umphant burst of music and with Spring­steen back to his “Born to Run” style shout, he, “tried to summon all that my heart finds true, and send it all in my letter to you.”

After a life of reckless heart­break, the writer of the letter takes, “Things I found out through hard times and good,” and writes them all out, “in ink and blood.” In the film, Spring­steen sings these words sur­rounded by his loving wife of 30 years, members of his beloved E Street Band, and his cousin, who taught him his first chords on the guitar.

“Born in the USA,” released 36 years earlier, tells a dif­ferent story. An opening denouncement of American war­mon­gering is fol­lowed by an imper­sonal but des­perate cry for a lover who will “come on in and cover me,” from, “the rain, the driving snow,” outside. Then, “driving out of Dar­lington County,” he searches for meaning in the freedom of rock and roll and strange women, as his friend Wayne is, “hand­cuffed to the bumper of a state trooper’s Ford.” Most of the rest of “Born in the USA” sings the same themes, accented by melan­choly guitar riffs and Bruce’s sig­nature growly, crooning, cyn­icism, and the occa­sional love song— “I’m on Fire” and “I’m Goin’ Down” — all in the midst of a war that, “ain’t ours anymore to win.”

The famous last three songs in the album show what Bruce, and many of his gen­er­ation, expected for their future. “Glory Days,” is what The Boss foresees for the melan­choly sub­jects of his music, while “Dancing in the Dark” is what he hopes they can enjoy for the time being. “My Hometown,” gets per­sonal. It’s about who he loves, and the unstop­pable eco­nomic and political forces destroying the backdrop of his childhood.

In May 1985, almost a year after the release of “Born in the U.S.A.,” Bruce Spring­steen married model Julianne Phillips. The mar­riage ended in divorce less than five years later, shortly after which Spring­steen began dating E Street Band member Patti Scialfa, his future wife and mother of his three children. But in 1984, Spring­steen sings, “Glory days, well they’ll pass you by,” in the song’s music video. The repeated chorus cul­mi­nates in a har­mo­nizing between Bruce and Patti, then merely band­mates, as they sing, “Glory days, they’ll pass you by, in the wink of a young girl’s eye.” In “Letter to You,” the girl he has found isn’t gone with a wink. In fact, as he sings in “Power of Prayer”, “it’s closing time,” and, “she’s standing there.” Of course, she always was.

“Born in the U.S.A.”, iron­i­cally mis­un­der­stood as a patriotic anthem, opens the album with a cynical picture of a country that doesn’t live up to the ideals it espouses. It ends with a picture of its victims — his hometown, his father, the men dreaming of their glory days, and the young people just “Dancing in the Dark.”

But in “Letter to You,” Bruce looks back on a life well lived, sur­rounded by family and friends, while fondly remem­bering those who have passed. Rather than the pur­poseless young man of “Born in the U.S.A.,” the Spring­steen of “Letter to You” is com­fortable, happy, and secure.

The doc­u­mentary itself was a joy to watch. In the midst of a pan­demic that keeps fam­ilies apart and friends sep­arate, the sight of warm, time-tested friendship man­i­fested in close, com­fortable quarters was refreshing to see. No masks. No dis­tancing that is decidedly un-social. No dis­posable cups and latex gloves. Just friends making music.

For Bruce, and for the char­acters in his songs, this is the dream, and it’s a dream many didn’t know they could realize. Spring­steen is in his hometown, with the woman he loves, the friends he respects, and the music he loves to make. But, after all, that’s the “power of prayer.”

As he looks back on his glory days, perhaps this time, The Boss really is proud to be born in the U.S.A. 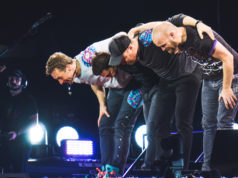 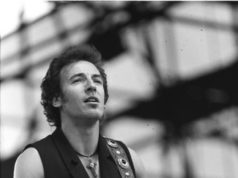 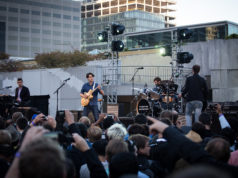