Although the COVID-19 pan­demic has greatly affected some local busi­nesses in Hillsdale County, many have not faced problems hiring new employees.

Marty Hubbard, the owner of Rough Draft, said that although the small business has faced many problems during COVID-19, hiring new employees has not been one of them. She said the biggest chal­lenge for business has been exer­cising pru­dence when deciding when to re-open, and under what guide­lines.

“Most of the country has been watching the virus since the first of March. And in the beginning, I think everyone, for all the correct reasons, was totally on board with the reg­u­la­tions,” Hubbard said. “I closed both of my busi­nesses. I thought it was in the best interest because we didn’t know what we were dealing with.”

Hubbard said she reopened her busi­nesses once she knew it was safe, but has been frus­trated by expansive guide­lines.

“As time went on, people lost liveli­hoods. They’ve lost jobs, and busi­nesses are closing,” Hubbard said. “But I think in this case, it’s true that the cure has been worse than the disease.”

When Rough Draft re-opened this summer, junior Sophia Berryhill was hired as a barista. Once she got back to Hillsdale, Berryhill said she was glad that she secured a job at a location that could conduct business as usual.

“I’ve wanted to work at Rough Draft since I visited as a prospective student in high school,” Berryhill said. “So it was very com­forting for me to know that they were con­fident in me being able to work and then being able to con­tinue business in Hillsdale.”

Berryhill said the training process in a pan­demic, as well as COVID-19 guide­lines, haven’t dulled her expe­rience at Rough Draft.

“They def­i­nitely weren’t scared to hire people. Training was pretty straight­forward and thank­fully, in terms of COVID-19 pre­cau­tions at Rough Draft, we’re socially dis­tanced from the cus­tomer,” Berryhill said. “We’re not really in close contact with people for more than a couple of minutes at a time. So there’s not a lot of fear that I’m going to get coro­n­avirus from working here.”

David Karim, owner of recently opened New York Taco, said that despite the “Now Hiring” sign outside of his store window, employees haven’t been hard to find — but good employees have been.

“We get a lot of people from online, but finding the right people is hard, because I require that you cannot be on any form of drugs when you are working,” Karim said. “It is intol­erable for our envi­ronment. And this is a family-owned business, so I want to make sure this is safe for my kids and for my cus­tomers.”

The one thing Karim has seen dis­courage people from applying for jobs is unem­ployment ben­efits, which have been repeatedly enhanced since the start of the pan­demic.

“COVID is making a big effect on business because of the amount of money being given to people,” Karim said. “You can sit home and get $600 unem­ployment without going to work. But we’re still finding people who want to work.”

Even though he opened New York Taco this month, business hasn’t been halted by the pan­demic, Karim said.

“We have a lot of people applying right now, because people need a job,” Karim said. “We also give them a free meal every time they work, we give them a pay­check and they are happy.”

Berryhill said she’s been impressed with local busi­nesses’ response to the pan­demic.

“They’re ready to serve Hillsdale again and get back in business,” Berryhill said. 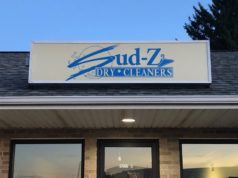 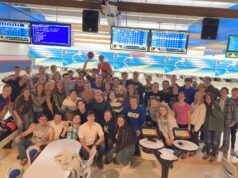 Last hurrah: Students make most of last night before lockdown 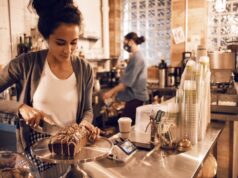