In a single day, Maj. Gen. Patrick Brady rescued nearly 100 seri­ously wounded men from embattled landing zones covered with thick fog and smoke in the Republic of Vietnam. For his valiant actions, Brady was awarded the Medal of Honor, the nation’s highest mil­itary dec­o­ration for valor, on Oct. 9, 1969. Now, Hillsdale will have the oppor­tunity to hear Brady speak on Nov. 11 at 7:30 p.m. in honor of Veteran’s Day.

Brady’s visit to campus will be the first time that a modern-day Medal of Honor recipient speaks at Hillsdale College.

Asso­ciate Pro­fessor of Man­agement Peter Jen­nings served in the U.S. Marine Corps as a mil­itary officer and said Brady will give the audience a sense of the Vietnam War and the people who served in the war. More impor­tantly, however, Jen­nings said he thinks Brady’s talk will help the audience under­stand patri­otism as a virtue.

“The year he was awarded the Medal of Honor was the same year that the protests and the flag burning started esca­lating,” Jen­nings said. “As in the ’60s, there’s a sig­nif­icant per­centage of our pop­u­lation that thinks America is just a bad country for a number of reasons. Gen. Brady has lived through all of that, and he has some important insights about this country.”

Jen­nings said Medal of Honor recip­ients have merited honor and are deserving of the nation’s respect because their actions go beyond what is expected of a soldier’s com­mitment to duty. A soldier, Jen­nings said, commits himself to serve a higher calling and accepts the risk of losing his life anytime he enters combat.

Each mil­itary medal includes a citation that describes the actions for which the recipient is awarded the medal.

“This medal is the only medal that in the citation uses the phrase ‘above and beyond the call of duty,’” Jen­nings said. “That phrase­ology — that lan­guage — is only used in this medal. Nobody could order the soldier to perform the actions that he or she did that earned them this medal. They’re above duty; they’re the kind of action that you cannot order somebody to do.”

According to the National Medal of Honor Museum Website, Brady flew over 2,000 combat mis­sions and rescued over 5,000 injured sol­diers during his two tours in Vietnam. During one of his mis­sions that earned him his medal, Brady “was requested to land in an enemy mine field where a platoon of American sol­diers was trapped. A mine det­o­nated near his heli­copter, wounding two crewmembers and dam­aging his ship,” according to his Medal of Honor citation.

Baldwin, who was awarded the medal twice, according to the Hillsdale College Digital Archives, “was sta­tioned out west during the Indian Wars and was the first man to be awarded a Medal of Honor in two dif­ferent con­flicts. His second Medal of Honor was awarded for the rescue of kid­napped girls in 1874.”

Michael Murray, who works in Insti­tu­tional Advancement for Hillsdale College, served in the Marine Corps and said that Medal of Honor recip­ients make up a small fra­ternity of indi­viduals within the mil­itary.

“They’re cut from a dif­ferent cloth,” Murray said. “And that’s why I think Gen. Brady’s talk presents a unique oppor­tunity for stu­dents.”

Both Jen­nings and Murray pointed out that a majority of Medal of Honors are awarded posthu­mously, so the oppor­tunity to hear from Brady is a rare expe­rience.

Asso­ciate Dean of Men Chief Jeffrey Rogers served as a corpsman in the Marine Corps and said Brady is a quin­tes­sential example of a hero.

“No greater love than has one than this, that one lay down his life for his friends — Jesus did that for us,” Rogers said. “Here’s a guy who lit­erally was going to lay his life down. He sur­vived to help others and give others life.”

Rogers said he looks forward to meeting Brady and learning from his expe­ri­ences.

“I know it’s busy, stu­dents get busy, there’s so many oppor­tu­nities here with dif­ferent speakers coming in, and you have to study, but this is one of those things where you should take the time to put this on your cal­endar,” Rogers said. 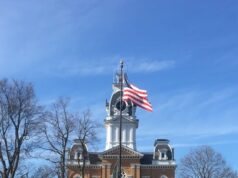 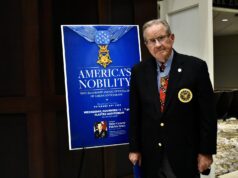