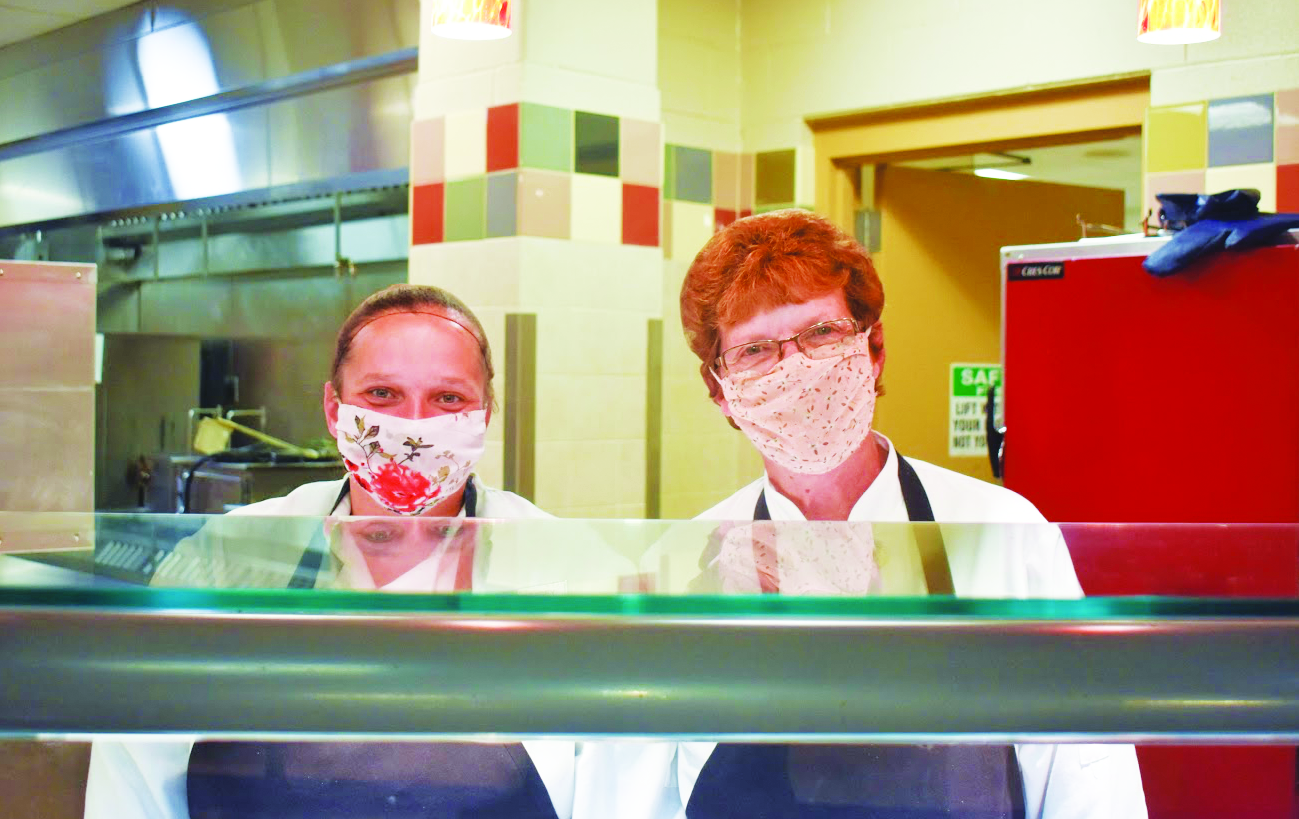 “I told everyone, ‘I’ll see you in nine days,’” Lattime, who works at the cash reg­ister in the front of Knorr Family Dining Room, said. During the break, however, Hillsdale College — along with vir­tually every edu­ca­tional insti­tution in the country — intro­duced remote learning in response to COVID-19.

The first days of the pan­demic were not easy for Lattime; concern about COVID-19 pre­oc­cupied her most of the time. When she wasn’t wor­rying about the future, she watched the news — a ruinous mistake, according to Lattime, which fueled her anxiety.

“As the weather improved, I became a little more relaxed about it,” Lattime said. As time went on, and Hillsdale planned its com­mencement cer­e­monies, many Bon Appetit employees got called back to assist with catering — but not Lattime.

Tina Dyson, who works in the kitchen and dining room, said many Bon Appetit workers expe­ri­enced financial dif­fi­culty when the pan­demic began. “Fighting for unem­ployment was not easy,” Dyson said, and the uncertain nature of their jobs made it even more difficult.

Lattime, whose job depends on stu­dents eating meals in the dining room, wit­nessed all her coworkers from afar return to work and serve the com­mencement cer­e­monies safely and suc­cess­fully. She wanted to come back, she said, but didn’t know if Hillsdale would resume in-person classes come August.

Lattime held out long enough. She heard the news that Hillsdale would welcome stu­dents back for the fall semester and received the call to come back to work. By no means was the pan­demic over, but finally, Lattime could return to work, serve the stu­dents she loves, and secure a steady income.

A lot has changed about food service since March. Lattime didn’t know what to expect besides required masks. Dyson felt worried but con­fident her team could handle the new pro­tocols. Jill Smith, who serves food in the dining room, was just happy to be back.

“I don’t want to go back to where we were,” Smith said. “Being trapped at home, it felt like the walls were closing in some days. You weren’t seeing faces, chatting with people. Some­times that can make your day, or you can help make their day. It makes the week move along.”

Smith lost these small-but-mean­ingful chance encounters to COVID-19, and as a result, the weeks did not seem to budge.

A few schools that opened early, like the Uni­versity of Notre Dame and the Uni­versity of North Car­olina, expe­ri­enced serious out­breaks within just a couple of weeks. The surge of cases on campus fol­lowing early reopenings led some of the country’s most trea­sured higher edu­cation insti­tu­tions to offer mostly online classes, including Michigan’s four largest colleges.

Hillsdale, however, pre­vailed. When the stu­dents came back to the new school year, Smith, Dyson, and Lattime focused on the tan­gible dif­fer­ences. They had to learn, in real time and with little guidance, how to run a college cafe­teria during a pandemic.

The biggest change for Smith was the new takeout style. Before the pan­demic, Bon Appetit set strict rules on which items cus­tomers could take out of the dining room. They deter­mined one piece of fruit, an ice cream cone, or a cookie was sufficient.

Now, Smith serves food in takeout con­tainers with pre-packaged plas­ticware. The single-serving milk cartons, she said, take her back to when her children were in grade school. Stu­dents are now encouraged to eat outside the dining hall since it reduced its capacity to avoid spreading COVID-19.

Smith’s biggest dis­comfort is her mask, which over­whelms her at times. “When you get busy and you begin to sweat, your breathing becomes labored,” she said. “You almost feel like you’re pan­icking, and some­times you need to step out, get some oxygen, and go back in there to finish up.”

Lattime noticed that stu­dents’ biggest frus­tration has also been with masks. Sit­uated at the front of the dining room, it’s her job to ensure stu­dents follow the pro­tocols Hillsdale put forth, including those regarding masks.

“I’d say to the stu­dents, ‘I’m willing to do whatever we have to so that we can be here,’” Lattime said, recalling springtime in quar­antine, when the walls seemed to close in and the weeks would stagnate. “So we can serve you. So you can go to school. So we can stay open.” To encourage pos­i­tivity, Lattime began treating the mask like a fashion statement — and some stu­dents fol­lowed suit.

Dyson, who spent the first few days serving coffee and tea so stu­dents wouldn’t con­t­a­m­inate Bon Appetit’s equipment, said stu­dents are more thankful than ever. “They’ll say, ‘Thank you for your hard work. Thank you for every­thing you’ve done for me,’” she said. “They stop to take the time to actually talk to us. I’ve gotten to know many more stu­dents than before.”

The dining hall’s purpose, according to Dyson, is to nourish the stu­dents safely so they can sustain a stu­dious college career. “We try to keep you safe because you guys are the future,” she said, com­paring Hillsdale stu­dents to her own children. “If some­thing happens in here, you’re not going to do good out there. To be able to learn and take things in, you have to eat and keep your body healthy.”

The pan­demic ushered in chaos to most areas of life. But in the dining room, Bon Appetit has con­tinued to innovate to meet the new chal­lenges posed by COVID-19.

Though Hillsdale held steady in the face of danger, its stu­dents and faculty are not immune. As of Oct. 26, the college has con­firmed 29 pos­itive COVID-19 cases, and Bon Appetit workers are paying attention.

In the dining room, Bon Appetit and its staff have total control over safety and pre­vention. Past that, though, staff rec­ognize stu­dents are respon­sible for their own behavior. “Outside of this room? I don’t always see social dis­tancing,” Lattime said, “and I don’t always see masks where they would be appropriate.”

Lattime said she attends church with many stu­dents. When student cases jumped, she avoided church, opting to worship from home. “It’s not just my own health, but I don’t want to make anyone else sick,” Lattime added.

To deal with stress, Dyson turned to humor. The new chairs, which don’t have cushions, are uncom­fortable and probably make the stu­dents eat and leave the dining room more quickly (Dyson swore this was not on purpose). She also quipped that the team has demon­strated near-perfect han­dling thus far into the school year; she never hears broken plates anymore.

Smith sug­gested “going one day at a time” and “keeping your head up” to stay grounded. “At first we were stressed, but now it’s a new way of life,” she said. “Be as pos­itive as you can and be mindful of every­thing and everyone.”

Lattime, who said she “has not adjusted yet” and doesn’t know if she ever will, recited her favorite quote to the rhythm of her first pounding on the table: “Strength rejoices in the challenge.”