Stu­dents and pro­fessors who spent last Sat­urday in either Lane or Kendall hall are well aware of the six-hour water outage caused by city maintenance.

Over the last several weeks Hillsdale’s Board of Public Util­ities turned off water around the city several times to replace water valves. Fol­lowing each replacement, the board issued a boil notice, requiring res­i­dents to boil their water for 48 hours to ensure its con­sumption safety. Although the city declared all water safe, the areas affected were all near the con­struction on Fayette, West, Manning, and College streets.

The board dis­covered the need for valve replace­ments during its con­struction at the inter­section of Fayette St. and West St. One of the con­struction workers who was oper­ating the valve turned it off, resulting in intense leakages. Once turned back on, the board decided to replace it to address damages.

To replace water valves, Waste and Waste­water Super­in­tendent Bill Briggs said he had to turn off all the water in the system, which caused a com­plete loss of water pressure. Whenever the pressure drops below 20 pounds per square inch, the city sends out a boil water notice.

“It’s just a pre­caution so nothing gets into the water that could harm anybody,” Briggs said. “And that involves taking samples around the system where the pressure has been dropped after you turn it back on.”

Col­lected samples are incu­bated for two con­sec­utive 24-hour tests to check for harmful bac­teria. Briggs said the samples all came back safe. During this time the board sent out a notice to res­i­dents rec­om­mending they boil water for at least fifteen minutes before con­sumption to kill pos­sible con­t­a­m­i­nation. The boil notice didn’t apply to water for bathing or washing clothes.

Test results for Saturday’s sam­pling came back at 2 p.m., which meant facil­ities in Lane and Kendall didn’t have drinkable water for the majority of the work day.

To help res­i­dents prepare for water outages, Briggs said the board employed a number of tactics around the city, including social media posts and website updates, as well as door-knocking in affected areas, and leaving door hangers. To notify the college Briggs reached out to Dave Billington, the college’s director of oper­ation for facil­ities and capital projects, who informed affected pro­fessors and students.

Junior Sophia Spinazze lives off-campus in a town­house on West St. She said she received an email from the college both times her water was turned off with ample time to prepare. Aside from minor incon­ve­niences, Spinazze said it wasn’t much trouble going a couple days without drinkable tap water.

“The only thing was I didn’t workout on Tuesday because I didn’t know if I would have been able to shower,” Spinazze said.

Pro­fessor of Eco­nomics Gary Wolfram agreed the water outages posed little problem for him and other faculty members.

“It made no dif­ference about whether I was in the office,” Wolfram said. “I brought a bottle of water. You could have gone to another building for water if you wanted. The fact that the water foun­tains had signs posted on them was a nice reminder.”

Replacement is now com­plete and Briggs said the board doesn’t intend to issue boil notices in the fore­seeable future. 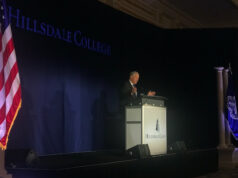 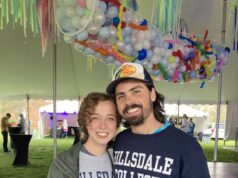