The Tower Player’s bring to the stage a question appro­pri­ately timed for the day and age of COVID-19:

“War of the Worlds: the Panic Broadcast” pre­miered on Wednesday, Sept. 30 at 7:30 p.m. Directed by Assistant Pro­fessor of Theatre Christopher Matsos, the play examines hys­teria and how the media con­tributes to panic.

Along with the Wednesday pre­miere, addi­tional shows will be Thursday through Sat­urday evenings at 7:30 and Sunday afternoon at 2 p.m. Audience members are asked to wear masks for the duration of the per­for­mance. There will be no inter­mission.

The play recreates the famous radio drama about mar­tians ter­ror­izing a New Jersey town. The drama is based on a short story by H.G. Wells and was adapted for radio by Orson Welles in 1938. The original broadcast was so con­vincing that many lis­teners believed the nation was under attack by extrater­res­trials.

In the play, the action is pre­sented through news reports and eye­witness accounts. It opens 10 years after the infamous night of hys­teria. Freddie Filmore, played by junior Sebastian Pestritto, pro­duces a “radio-play within a radio-play.” Fillmore’s studio recreates the original broadcast by Orson Welles.

Fillmore takes the audience back to Welles’ station, where the scheduled evening of dance music is con­tin­ually inter­rupted by reports of dis­tur­bances on Mars and the dis­covery of a strange metal object in New Jersey.

The action heightens when Carl Phillips, played by sophomore John Tassef, goes to the scene of the spaceship landing to interview and report first-hand what he sees. Finding a mob of dis­turbed people, Phillips is shocked to report metal aliens climbing out from a spaceship.

Though the play is almost com­pletely dia­logue driven, this doesn’t detract from the energy of the per­for­mance. With only eight cast members, the actors tran­sition between char­acters and time periods throughout the show. The actors switch back and forth in the effi­cient radio style, with reporters, studio announcers, and bystanders con­tributing in an inter­woven exchange that is cap­ti­vating to watch.

The audience feels immersed in both the worlds of radio and the town’s hys­teria. Vintage “applause” signs light up on cue and foley artists — radio sound engi­neers — create onstage sound effects. Old-fash­ioned radio micro­phones spaced out on the stage floor con­stitute the backbone of the set.

A majority of the lines are read off the script, staying true to how radio drama would have been per­formed, said senior Mikela St. John, an actress in the play.

St. John, who plays one of the foley artists, said it was a very unique oppor­tunity to create sound effects on stage.

“There was lots of exper­i­men­tation,” St. John said. “For every sound effect, I had to ask, ‘What makes this noise? ‘What makes a ticking noise?’ Appar­ently a gavel does.”

At times, there is very little action within the scenes, however, the per­formers do an excellent job of cre­ating excitement in each one. The light design fills the stage with dif­ferent colors depending on the mood of the scene, giving the audience the expe­ri­ences of fire, peace, and despair before the play is fin­ished. Pro­jec­tions of metal mar­tians capture the imag­i­nation of the char­acters.

As the alien attacks escalate, freshman Lil­liana Cardwell, who plays Pro­fessor Peirson, describes a world much too similar to the quar­an­tined one we live in now: empty streets, silent shop windows, and strange reac­tions when people live a normal lifestyle.

“I’ve focused a lot on the tone, pitch and manner of the voice, as well as the phys­i­cality and tempo of the char­acters,” Pestritto said. “Playing somebody as famous as Orson Wells was a little intim­i­dating at first, but it’s been a very rewarding process.”

The play cul­mi­nates in a scene with Welles answering ques­tions — and asking some of his own — in a crowd of angry jour­nalists. Accused of cre­ating mass panic and even causing people to commit suicide all for the sake of enter­tainment, Welles wonders why so many people believed his drama without stopping to think.

Matsos said the pro­duction asks important ques­tions about the media and how people respond to it.

“Think crit­i­cally about what you hear,” Matsos said. “In this time of elec­tions and COVID, it’s scary how easily things are con­fused.”

Matsos said he chose the play because of its flex­i­bility.

The actors wear face masks that match their cos­tumes when they are not speaking in an effort to keep everyone healthy throughout the per­for­mances, St. John said.

With almost no live theater hap­pening across the country, Matsos said it’s important that the Hillsdale com­munity takes advantage of the oppor­tunity to see the play in person.

“Theater doesn’t have to be shut­tered,” Matsos said. “It can still speak to the cir­cum­stances.” 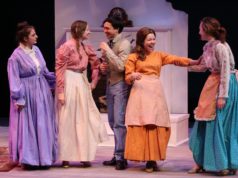 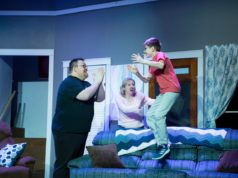