Hillsdale’s Student Activ­ities Board has can­celed Car­nival in the Arb. The event, which was designed to replace the Garden Party, was for­mally can­celed Tuesday due to safety and health con­cerns related to the coro­n­avirus pan­demic.

“It was a team decision to cancel the event on Friday,” said Zane Mabry ’20, director of Student Activ­ities. “We didn’t have any pressure to cancel, but given the current climate on campus, it seemed like the team thought it would be best for us to not throw a large on-campus event.”

Junior Luciya Katcher, SAB’s big event leader, stressed the com­bined part­nership of the activ­ities board and the college admin­is­tration.

“We made the decision in tandem with the admin­is­tration,” Katcher said. “Our purpose for the Student Activ­ities Board is always student-cen­tered. We love being in touch with the stu­dents and being able to serve campus in a way that encourages social devel­opment, but in a fun and safe way. And so, in light of COVID-19, of course safety is at the front of our minds.”

Although SAB adjusted its original plan to make the event as safe as pos­sible, the team ulti­mately decided it was best to cancel because of increased hes­i­tancy among the student body, Mabry said.

“It took a lot of dis­cussion, and it def­i­nitely wasn’t an easy decision or a quick decision,” he said. “We had been working with the admin­is­tration to make sure that the event would be good and safe, so it was a very sad decision to cancel the event on Friday.”

Another concern was keeping the SAB team members healthy.

“We’re being good stewards of our SAB budget and of our time,” Katcher said. “We’re stu­dents too, so we want to keep our safety as a team.”

Katcher said she hopes some fea­tures of the car­nival event can still be used in the future.

“I think we’ll have some of those really great ele­ments from this event in future events,” Katcher said. “We want to make sure we would serve campus in the way they want to be served.”

The rest of SAB’s schedule will proceed as planned, with its next event, Fall Fest, scheduled for Oct. 16.

Mabry said SAB is working hard to host events this semester, even if the events are somewhat smaller in size.

“We’re by no means giving up on this semester,” Mabry said. “We’re so excited to host all the events that we can, and we’re still planning to move ahead as best we can.” 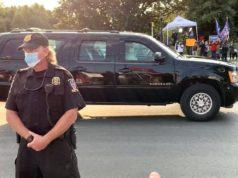 View from the ground: Trump thanks supporters with Walter Reed hospital drive-by

Don’t succumb to the mask mania