Four Hillsdale pro­fessors and 19 other aca­d­emics signed a letter on Oct. 6 asking the Pulitzer Prize board to revoke the prize it awarded to Nikole Hannah-Jones of the New York Times for the 1619 Project.

The Pulitzer board awarded the 2020 Prize for Com­mentary to Hannah-Jones for her lead essay in the 1619 Project, titled, “Our democracy’s founding ideals were false when they were written.”

The 1619 project, which seeks to rein­terpret the American founding from the per­spective of African American slaves, has been con­demned by both main­stream and con­ser­v­ative his­to­rians for its claim that pro­tecting the insti­tution of slavery was a primary motive for the American Rev­o­lution, “a claim for which there is simply no evi­dence,” the letter’s authors state.

Hanson said the 1619 Project is “fac­tually not the ‘real founding’ of the United States.”

“When rep­utable his­to­rians demon­strably proved that point to Hannah-Jones, she did not offer coherent counter-argu­ments to support her thesis, but rather she denied that she had ever argued for a 1619 foun­da­tional date at all,” Hanson said. “Her platform, the New York Times, without expla­nation, mys­te­ri­ously removed a prior explicit ref­erence to the 1619 foun­da­tional date as being essential to the project. In other words, Hannah-Jones was awarded the Pulitzer Prize on the basis of argu­ments that she now not only disowns but claims that she never really made — again demon­strably untrue.”

The letter cites serious factual errors in the 1619 Project as a whole as reasons for Pulitzer to revoke its pres­ti­gious award.

“Prominent his­to­rians, most of them deeply sym­pa­thetic to the Project’s goal of bringing the African American expe­rience more fully into our under­standing of the American past, nev­er­theless felt obliged to point out, in public state­ments beginning in Sep­tember 2019, the Project’s serious factual errors, spe­cious gen­er­al­iza­tions, and forced inter­pre­ta­tions,” the letter reads. “Hannah-Jones did not refute these crit­i­cisms or answer them in a respectful or mean­ingful way. Instead, she dis­missed them.”

According to Arnn, the New York Times is mis­taken about three key ele­ments of America’s founding.

“I think the Times is mis­taken, now, in three serious ways,” Arnn said in an email. “Claiming that the real founding of America was the arrival of that ship with slaves on it (they were actually inden­tured ser­vants, not slaves, but they were cap­tured Africans brought to America likely against their will); in altering the record without admitting it; and, by altering it, making a new argument that is, in my opinion, worse than the original.”

“This is very like what hap­pened in the novel ‘1984,’” Arnn said. “History becomes a weapon of despotism.”

Hannah-Jones responded to the letter in a series of tweets on Oct. 6.

“In 1894, the NYT called Ida B. Wells a ‘slan­derous and nasty-minded mulat­tress’ for daring to tell the truth about lynching. 100 years later she earned the Pulitzer Prize. These efforts to dis­credit my work simply put me in a long tra­dition of BW who failed to know their places,” she tweeted.

Arnn said the letter came to his attention through Stanley Kurtz, senior fellow at the Ethics and Public Policy Center; Peter Wood, pres­ident of the National Asso­ci­ation of Scholars, where the letter is cur­rently posted; Roger Kimball, editor and pub­lisher of the New Cri­terion and a Hillsdale College parent; and Wilfred McClay, author of “Land of Hope,” all of whom also signed the letter.

“I hope the letter will vin­dicate the propo­sition from Aris­totle: ‘This alone is denied even to God, to make what has been not to have been,’” Arnn said. 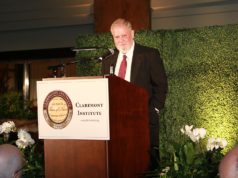