Adren­aline is rushing. Two armor-clad men swing at at each other holding their swords high.

Is skill or strength the advantage? Cus­tomers line up to take turns bat­tling out their honor on the marked floor. After receiving clear and simple instruc­tions, a diverse crowd — young children, college stu­dents, and adults alike — wield col­orful and unique weapons to prove their mettle in a safe envi­ronment.

Williams, a friendly and down-to-earth indi­vidual, worked with heating and air con­di­tioning systems for over 26 years in six dif­ferent states. After an injury to his meniscus, caused by years of this type of work, doctors told him that if he kept working full time he would have to replace his knee in about five years. So, Williams decided to open Blade and Bones to explore his life-long pas­sions part-time.

“I have always been into this type of stuff — martial arts, weapons, sur­vival gear, both prac­ticing and teaching,” Williams said. “My parents always said to do what you love and what you know.”

Williams said when he bought his first sword at twelve-years-old, he went out to a field and started cutting up the corn. He said although he got in trouble with the farmer and his father, this was when his love of swords began.

As of now, Blades and Bones is open only three days a week — Thursday through Sat­urday. Williams hopes that in the future he can focus on Blade and Bones full time rather than bal­ancing it with part-time work at a local heating and air con­di­tioning company.

“I want to get it to where I am open all the time,” Williams said. “I want to do gun and knife shows after every­thing returns back to normal. An online store would be great as well.”

Williams said he is always looking to grow his business.

“Right now I try to put every­thing I make from the business back into the business,” Williams said. “So when I sell a knife I will take that profit and buy two more.

Williams’ son Damon hangs around the shop and helps his father out however he can. To a cus­tomer stopping in, Blade and Bones feels very much like a family business.

“It’s nothing like any other store,” Damon said. “I’ve never seen a bigger col­lection of knives or swords.”

“I like to deal with high grade steel,” Williams said. “I don’t deal with any of the stainless, which is the lower grade and could be damaged. They are just beau­tiful and  col­lectible. I have every­thing from long swords to ori­ental swords to gladius swords to Spartan broadswords, so there is a lot of history in the blades and where they come from.”

Williams said there are cus­tomers that will buy several of his knives and swords. “Repeat cus­tomers are what keeps me afloat,” he said.

In addition to its wide selection of mer­chandise, Blade and Bones attracts cus­tomers with its unusual Friday and Sat­urday night events.

Some of Williams’ cus­tomers like to chop up water­melons with their swords while others are into live action role play. Raif Plots came into Blade and Bones for the first time with a few of his friends to specif­i­cally try out the dueling.

“There was a lot more variety to every­thing than I thought there would be, in the practice toy weapons and the real things and the art on the wall,” Plots said. “The fighting was a blast and he did a great job explaining every­thing — all the rules. And friends make it better.” 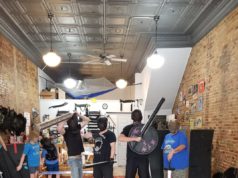 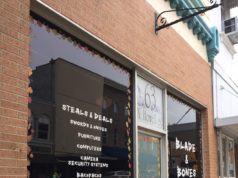